Don Byron: You Are #6: More Music for Six Musicians 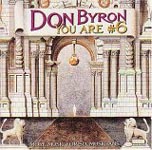 "I am not a number. I am a free man," insists Patrick McGoohan's character on the late '60s British television series, The Prisoner. He responds to his captors' dictum, "You are Number Six," regarding his new identity. '80s heavy metal icons Iron Maiden ingeniously quote these lines as the introduction to their classic tune of the same name, "The Prisoner". Jazz clarinetist Don Byron recycles the concept, adopting this sentence from the program as the title of his latest album, Your Are #6: More Music for Six Musicians. While Iron Maiden stuck to a linear narrative of The Prisoner 's surreal themes about the uncertainty of truth, Byron produces an incongruous mixture of styles that leaves listeners skeptical of what they're hearing.

An artist of multifarious tastes, Byron has embraced every musical style: he began his career playing Jewish Klezmer music; expressed free jazz inclinations on his first album, Tuskegee Experiments ; has probed hip-hop and funk; and, most recently, continues to explore new reaches with his Six Musicians band. This propensity for the heterogeneous informs Your Are #6. Byron provides Caribbean grooves, vocals, straight-ahead, calypso, and even a remix by DJ Spooky. Throughout this musical syncretism, the common thread of Caribbean rhythms pervades. Milton Cardona's congas and percussion leave a pronounced impression on virtually every song: you'll find your feet tapping unconsciously.

The straight-ahead tunes cook. Not surprisingly, they exhibit strong melodic structure and satisfying improvisation. "A Whisper in My Ear", a tribute to trumpeter and Byron mentor Mario Bauza, opens with a conga and percussion introduction then segues into the Latin melody stated by the horns. Byron initiates the solos traversing the range of his instrument and developing a continuous flow of ideas. Gomez displays a percussive style that's consonant with the rhythm Cardona establishes. Via his incessant, hammering block chords, Gomez isolates the root characteristic of the ivories—in the final analysis, the piano is a percussion instrument. Zollar starts off his solo with wide spaces, extending notes for a while; as ideas evolve, he picks up the pace and spits out a flurry of half-valved buzzes. Similarly, "Dark Room" manifests a traditional head-solo-head structure and a foreboding Latin theme. Zollar's solo ominously floats and recalls Miles of In A Silent Way. The calypso standard, "Shake 'Em Up," absolutely grooves—cogently combining calypso melody, vocals, and instrumental exchanges.

The genre-defying pieces leave something to be desired—and it's not an issue of not getting the stuff: informed eclecticism is one thing, narcissistic whimsy is another. The brief (1:55) title track offers little to grasp onto. Aside from a spurt of clarinet improvisation, "B-Setting" meanders through repetitive incantations of the melody. Technical and improvisational brilliance marks this band, yet Byron, et al. never stretch out on these concept tunes. While politically astute, "Dub-Ya," the leader's commentary on the current inhabitant of the Oval Office (and originating as "an orchestral piece about dumb animals") is musically capricious. And what's a DJ remix doing here? On "The Prisoner," Iron Maiden deftly applied a novelty to contribute a competent heavy metal number. Listening to Don Byron's most recent offering, Patrick McGoohan's Prisoner would find the sensation created by Your Are #6's conceptual discordance uncannily familiar.