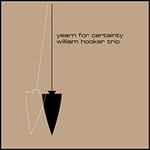 Drummer William Hooker can tell stories in many more ways than one. On Yearn for Certainty, he works his majestic tenor vocal chords as he recites a poem that accompanies the initial track, "Ingratiated Beam—Leroy." One track later, on the superbly crafted, rhapsodic melody of "Century's Soles," Hooker manipulates his ensemble of drums to tell a wholly different story, reaching deep into the African-ness of the origin of all civilization, as he follows footprints in the proverbial sands of time. These are the highlights of this album and also present the two sides of Hooker's artistry.

As he recites, there is a quirky breakup of the lines—obviously following the poem as it is written—but developing a swaggering rhythm that mimics his own approach to drumming. Hooker then returns, on the following track, to his traditional role as drummer, with anything but a traditional exposition of his skills. Both tracks deal with the irony of progress, as the artist walks along the path that brings civilization to that point in time when it is time to take a hard look at what really has been achieved. If this sounds heavy and ponderous, it is—at least in "Ingratiated Beam—Leroy," the one saving grace being that which is mostly ignored through the ages—art. The power in "Century's Soles" lies in the drumming that is constantly broken up by the bombs that Hooker delivers on the bass drum, and the counterpoint provided by Sabir Mateen's saxophone and guitarist David Soldier, who returns here with a bluegrass-like banjo.

Why spend so much space on a miniature dissertation about just these two tracks? Because they both set up the epic music of "Majistrait," a devastating indictment of the new colonial thing called capitalism, and the other epic track, "Yearn for Certainty," a moving piece that sets up the ensemble for a veritable journey to the centre of the current human condition—bereft of anything that it might have to find a semblance of steadiness. On "Majistrait," there is a superb interaction between the musicians, with Hooker's percussion and Soldier—who employs every stringed instrument at his command—snaking in and around each other's musical space, as both of them weave intricate tapestries with Mateen's filigreed clarinet. Hooker's thunderous percussion here is only interrupted by his primordial cries, mirrored by Soldier's wailing violin.

"Yearn for Certainty" presents sweeping vistas at the opposite end of the world—in America, where the ensemble discovers that sense of longing for what is tangible and true. Reeds and woodwinds, and strings play the part of the yearning, while Hooker's masterful drumming conjures up images of disconnect between certainty and the dislocation, spinning from the two ends playing off against the middle. Then Hooker bursts in, as he comments on the degeneration of all music, into a morass that is unrecognizable as art, before he explodes again on his drums to set things right.

The energy of the music is as significant as the medium and the message. Hooker, Soldier and Mateen break every barrier—musical or otherwise—to embed their music in the mind, where it rightfully belongs.