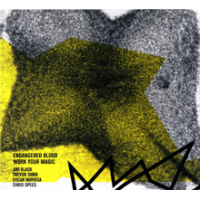 Although Noriega contributes the dolorous "Nice Try," Speed once again acts as the group's primary composer, with a rousing cover of Icelandic guitarist Hilmar Jensson's "International Four" rounding out the program. The minimalist repetition of interweaving contrapuntal lines is one of Speed's preferred structural devices, as hypnotic tunes like "Kaffibarinn" and "Ah-Le-Pa" bear out; the lush instrumental latticework of the former and fervent rhythmic break-down in the latter keenly demonstrate the strength of his writing. Similarly enthralling, the cubist theme of "Manzanita" culminates in a state of anthemic fervor, bolstered by Noriega's caterwauling bass clarinet, while the nostalgic closer "LA#5" offers a modernistic spin on old-fashioned balladry, spotlighting Speed's languid tenor channeling Lester Young's breathy lyricism.

One of Endangered Blood's most salient traits is its dedicated embrace of improvisation within the context of composed forms, an aspect not as readily apparent in some of the members' flagship bands; Black's AlasNoAxis and Speed's yeah NO rely primarily on prewritten frameworks, with limited space allocated for spontaneous detours. Work Your Magic inverts that dynamic, especially on traditionally minded pieces, including the deconstructed "Blues in C Flat Minor" and the muscular swinger "Argento," which allow these talented soloists ample opportunity to shine on their respective instruments, echoing the album's title with mantra-like sentiment.