By Doug Collette
January 2, 2022
Sign in to view read count

Exhibiting the self-restraint and willingness to let their subject speak for himself, authors/editors Guthrie and Santelli engage in no myth-making here—rather, they posit varied perspectives on Woody Guthrie much as he depicted himself, flawed but self-aware, proud but not overweeningly so. 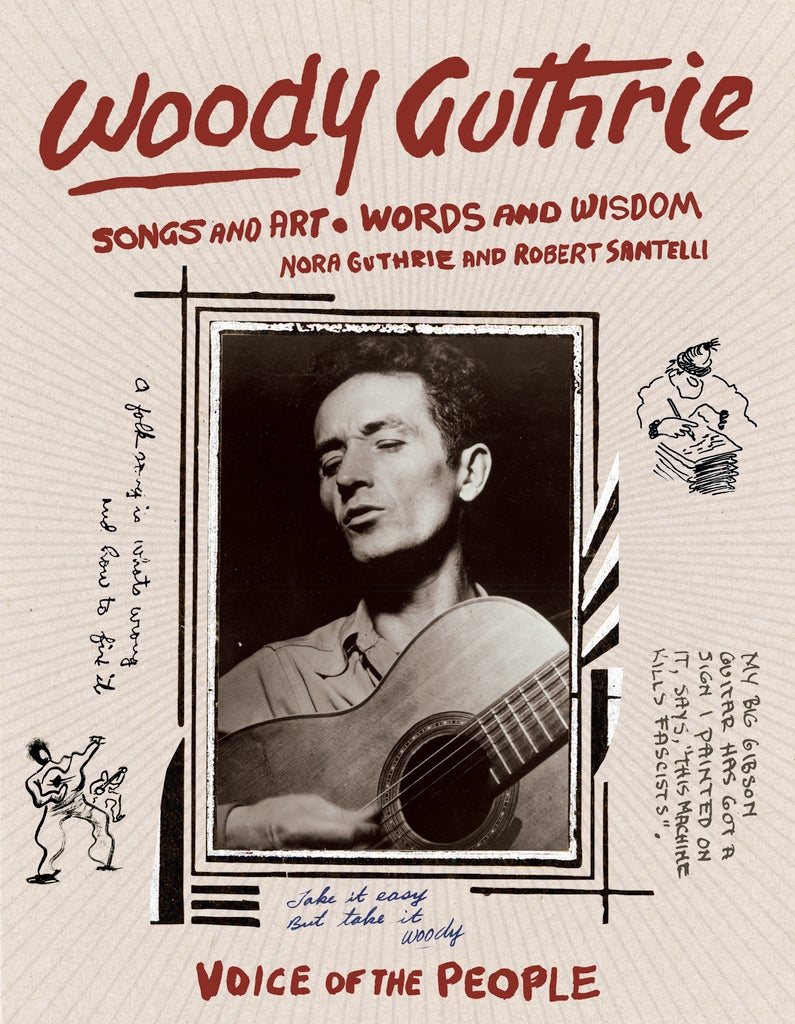 Hefting this weighty tome for an initial perusal, the word that first comes to mind is cornucopia. This extensive collection of lyrics, excerpts from journals and notebooks along with rare artwork and personal photos offers a wealth of insight and information into the heart, mind and soul of Woody Guthrie. As executed by his daughter Nora and Robert Santelli, with whom she developed the Tulsa-based Woody Guthrie Center, the interweaving of content is as dense as it is illuminating. And, like the lively dust-cover art with its flat and glossy finish wrapped around an arresting but simple self-portrait graphic of American's greatest folksinger, there's a profound clarity of thought beneath the surface.

The undercurrent of whimsy in Guthrie's work ultimately prevents the absorption of the book's content from becoming daunting. The process is, instead, altogether delightful as Woody clearly refuses to take himself too seriously even as he addresses serious and sensitive issues such as economic inequality with the solemnity and respect they deserve. In keeping with the place of his birth near the very center of the United States, this native of Oklahoma maintains a worldview simultaneously broad and deep. He is thus able to focus on particulars, such as the names of the unnamed deportees in the Los Gatos plane crash, while simultaneously highlighting the larger perspective of race.

Exhibiting the self-restraint and willingness to let their subject speak for himself, authors/editors Guthrie and Santelli engage in no myth-making here. Rather, they posit varied perspectives on Woody Guthrie much as he depicted himself, flawed but self-aware, proud but not overweeningly so. If for no other reason than the array of photos (like those from the Pacific Northwest) is little more picturesque than the drawings (as on page 32 of the total 340, the writing is similarly evocative, both in verse and prose. Just as the subject regularly found so much in the world around him thought-provoking, so too will the printed material within the approximately nine-by-eleven inch format deliver a similar sensation.

The title Songs and Art—Words and Wisdom is thus apropos, almost gloriously so. Testimonials from personages as varied as songwriter/musician Rosanne Cash (daughter of Johnny but an estimable artist in her own right), rapper Chuck D (the erstwhile leader of Public Enemy), and author/presidential historian Douglas Brinkley illustrate the breadth of reach and depth of resonance radiating from Woody Guthrie's multi-faceted output. The entries of the latter three's contributions, among others, presents wide-ranging options from which to pick and choose from the table of contents; it is not necessary to read from beginning to end in order glean the maximum value available here.

This series of understated reiterations clarifies that Woody Guthrie's greatest virtue may well have been his keen ability to see himself in others and others in himself. No doubt he was aware of his frailties as a human being and, with no false modesty, took much time and effort to point out the shortcomings of the species at large. Yet he didn't simply resign himself to anyone's character flaws, least of all his own; he had faith in the human race.

And while he was sympathetic, perhaps to a fault, with a certain segment of the globe's population, he was also unforgiving to those who exalted themselves at the expense of others. Self-deprecating as he could be, (overly so?), when Guthrie came to a conclusion, he stated it in so forthright a manner, anyone reading or hearing him was either convinced of his point of view or challenged by its innate intelligence. (His handwriting is even more precise than his typing, mirroring Woody's finely-honed intellect.)

Like the greatest works by or about any genuine icon, Songs and Art—Words and Wisdom should move the reader to delve (back) into not only this man's work, but that of the artists he inspired. Without much other multi-media documentation of the Oklahoman's life and work from the Thirties, Forties and Fifties (before he succumbed to the effects of Huntington's disease), such projects as this are indispensable in reaffirming that Woody Guthrie, the man and the artist are one and the same—he is, a figure deserving true reverence and admiration.

Little wonder then, to see the expanse of his influence. The multiple homages offered by the Nobel Laureate from Minnesota, Bob Dylan (his own personal and creative archive, for instance is located in his hero's home state of Oklahoma) and the varied tributes from musicians of subsequent generations, including the Billy Bragg/Wilco collaboration Mermaid Avenue: The Complete Sessions (Nonesuch, 2012) and the arguably superior Jay Farrar and Jim James'-fronted New Multitudes (Rounder, 2012)—extend a hallowed tradition. And it is one Songs and Art—Words and Wisdom suggests Woody Guthrie reinvented for our modern age.