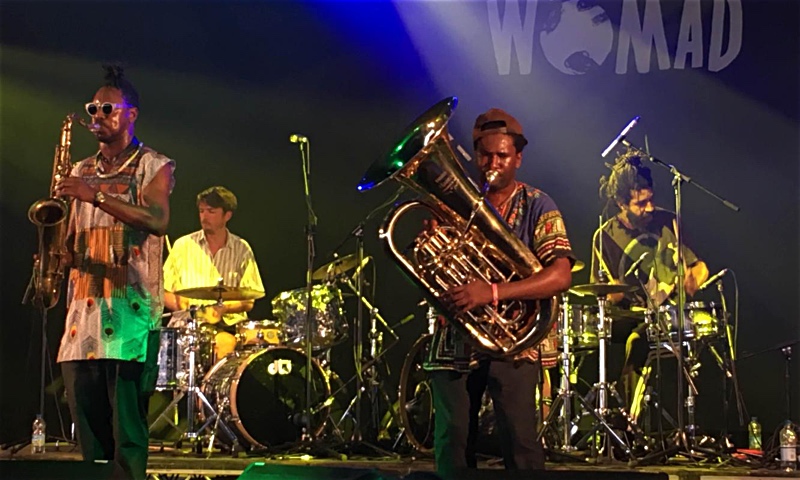 In 2015, half of the WOMAD festival's long weekend suffered a deluge of rain, the strength of its music having to do battle with a general spiritual soddenness. This year's edition thankfully featured uniformly pleasant conditions, with the downpouring held off until Monday morning's packing-away activities. The World Of Music, Arts & Dance has now reached its tenth year on this Charlton Park site, with a few 2016 tweakings and rotations of its physical set-up, just to keep the crowds from becoming complacent. A key joy of WOMAD is its persistence in presenting a significant number of artists who are making their UK debut, or are otherwise unfamiliar. There are always major discoveries in global sound to be made during this festival. Not that it's ever lacking in known headliners, this year's starry acts being George Clinton, John Grant, Baaba Maal, Asian Dub Foundation and St. Germain.

In the Bowers & Wilkins tent, matters often took an electronic turn, to show off this hi-fi company's sound system. A Guy Called Gerald played remarkably early, opening Friday's programme at 2pm, surely one of this Manchester native's earliest sets in nearly three decades of performing. Although his "Voodoo Ray" became a key minimalist electronica recording in 1988, Gerald Simpson's sound has moved with the times, currently incorporating multiple elements and sounding very much in the now, and very much a product of live improvisation. About halfway through his concise one hour set (most of this fest's artists don't get to play any longer than that), the stuttered beats started to knit together in a tightly-stepping web, different sonic layers meeting at rhythmic intersection points, as Gerald entered a 30 minute climax, reaching just the right cut-off point when desired. The bass bumps were heavily loaded, but the trebly gnashing was equally pointed.

The Moroccan singer Hindi Zahra offered a complete contrast, relying on the old school rock band construction, although subtly streaked with trace elements from her heritage territories (she grew up in Paris). The very traditionalist presentation was what marked her out, with an attention to grand stadium gestures, but without any annoying crowd control measures. Zahra possessed a kind of hippy abandonment, garbed in a long, voluminous dress, topped with a jaunty cocked hat. Once this titfer was removed, there was much shaking of long tresses. The band's moves were reliably predictable within this rocking vocabulary, but very effective nevertheless, as they were executed with good taste and clenched restraint. Zahra hopped between French and English, with a peppering of Berber language. She knows how to work a crowd without irritating them, coming across as completely and sincerely involved.

One of the main festival highlights arrived early, with the Polish string quintet Volosi, taking folk and classical fusion to new extremes. They weren't exactly a hardcore Polish fiddling combo, with their cello and upright bass, the repertoire and style containing hints of a classical deportment, but Volosi's physical delivery was about as extreme as they could take it, without smashing up their frail axes. They had a love of gathering together in a tight cluster, as the tunes reached their flailing points, ever-quickening virtuoso peaks topping each other in an unstoppable rush. They took tunes higher, faster and harder, ripping out massive detail and depositing it on the eager crowd, creating a civilised rabble at only four in the afternoon.

Virtually straight afterwards came Bamba Wassoulou Groove, another of the weekend's supreme peaks. Featuring drums, percussion, bass and a trio of spangling guitars (the Super Rail Band's Moussa Diabaté dazzling on one of them), their full power was revealed when singer Ousmane Diakité came onstage, his vocal power thrusting forward and upwards, goading the tunes towards a tougher existence, with the aid of his hand-held tail-duster. Certainly one of the weekend's dancing hot spots, loaded with compulsively complicated, light-footing prompts.

Later, in the same Siam Tent, the Lebanese microtonal trumpeter Ibrahim Maalouf led his large Parisian band, their thrust having graduated to an even greater bombast nowadays. Maalouf fronts a rousing crew, not least along with his fellow trumpet section, but the presentation was almost too enthusiastic, too much on an epic scale. He was undoubtedly carried away by the moment, but these epic musical gestures sometimes sounded too overblown, particularly when surrounded by some of the subtler sounds found at this festival.

Speaking of subtlety, John Grant was next up on the Open Air Stage, as brooding and deadpan a musician as could ever be hoped for, his theatrical, rich-voiced phrases emanating from deep within his bushy beard. The Michigan-born Grant is like an ultra-perverse Elton John, when he sits at the keyboard, his songs often inflamed by a sense of dark drama, a massive platform for lines that are sometimes unnervingly throwaway in their poetic impact, packed with specific and obscure artistic references, and loaded with unlikely rhymes, augmented by his three-piece backing singer posse. Grant is a stand-up comedian for those of us who enjoy a grim smile. When his songs are riddled with stray electronic content, the approach is suddenly twisted, heading from evil pop to morbid low-range disco pulsations, always with his voice resonating at the music's heart. He's emotional but guarded, almost mocking himself, and sometimes his audience, with a gleeful cruelty. As a headline act, Grant gave an oddly introverted performance, once the day's dancing had ceased, the crowd involuntarily drawn into his personal world of confessional celebration.

Back in the Siam Tent, mohan veena slide guitarist Vishwa Mohan Bhatt led a spread of seated musicians in a lively exploration of Hindustani classical music, though with an even more vigorous momentum than usual. In this rare appearance, Bhatt infused his runs with a rock'n'roll energy, his Desert Slide ensemble attaining a ripping extremity that married spectacular virtuosity with an uncaged friction.

An eccentric start to Saturday came at high noon, with cosmic multi-instrumentalist Paddy Steer, consolidating a Manchester theme for this early slot in the Bowers & Wilkins tent, following the previous day's Gerald opening. Steer is also known as a member of the Homelife collective, but his solo shows are now a more likely platform. Clothed in a post-Sun Ra styled shiny robe and head-gear, ostensibly playing a drumkit, Steer is also surrounded by customised, ancient electronics gear, vintage wobbly keyboards, latched-on xylophone, and piles of exotic percussion. His mode is highly rhythmic, but in a cranky fashion, prompting the question: are these complex outer space time signatures, or is everything disintegrating, slipping out of hand? This doesn't matter when Steer is gluing all together by sheer force of enthusiasm. The bricolage becomes a vital part of the clattering drive. Inexplicably, he switched from sparkly crown to adapted space helmet, although this might have had an important role in altering his voice. Afterwards, he balanced said helmet on his teetering tower of electronics, adding an extra amount of suspense to the set.

There was much anticipation for the return of the Songhai ensemble, makers of two classic collaborative albums, released in 1988 and 1994. This was a meeting between the Spanish flamenco crew Ketama, English jazz-folk bassist Danny Thompson and Malian kora maestro Toumani Diabate. Unfortunately, Thompson wasn't involved with this reunion, and doubly unfortunately, the band were unavoidably delayed in their arrival at the festival site. The golden rule in such a situation is to remain aware that your set-time is your set-time, and any extension is not possible within a tightly structured multi-stage festival timetable. So, it's advisable not to spend 25 valuable minutes fine-tuning a soundcheck. With the very high quality of the festival's sound team, this could have been done on the hoof, as the band were playing. In the end, they managed an extra five minutes, providing barely a vinyl LP's running time, which was just about adequate. The music was slick and expressive, especially under such harried circumstances, but the crowds had suffered, with their original focused energies dispersed.

Hopping across to the Siam Tent again, sitarist Anoushka Shankar was already embarking on some radically different directions. Previous occasions have seen her not straying too much away from a classic Indian classical framework, but her current band is journeying into fusion areas, mashing together shehnai reed-flute and electronics. With complete confidence and striking success, it must be added. There was one particular point during the set where the entire orientation shifted towards a brutalist thrash metal sound-wall, with Shankar skating across the riffersphere, completely at one with this style excursion.

Time for yet another supreme highlight, as the London foursome Sons Of Kemet conquered the Big Red Tent. Tenor saxophonist Shabaka Hutchings is joined by a tuba and double-drummer onslaught (particularly when they're in duelling solos mode), taking New Orleans parade music and launching it into cosmic outer reaches, with flecks of Afrobeat, Ethiopian jazz, speed-ska and general free-form bluster. Their music is radical and danceable, achieving an aim that's still relatively rare. Hutchings kept up a lusty, raw-throated riff-vanguard, mostly seeking momentum rather than solo flashing. The level of intensity just kept on rising throughout their one hour set. This band are really bringing the jazz sensibility out to folks who might not think that they dig the sound, without any compromise. In fact, they're deliberately courting the extremes of their instruments, notably with Theon Cross negotiating some unbelievably nimble lines on tuba, at highest speed, and with fullest attack.

Saturday's headliner was George Clinton, still touring his leviathan Parliament/Funkadelic composite. Not that they were as leviathan as when he plays his regular New York City shows, but by any definition this was still a stage populated by a fulsome artist complement, many of them singers, rappers and/or emcees. The man himself refrained from singing, as the last few recent times he's been caught, hoarseness and gravelled delivery have been his chief qualities. Clinton's present position is being the ultimate catalyst, the set opening with a predilection for rapping, then gradually moving into the funk classics, including "Flash Light," "One Nation Under A Groove" and "Maggot Brain," the latter being an extended psychedelic guitar freak-out. This ritualistic Funkadelic number was placed just before the climactic disco funk-out of "Atomic Dog," giving the crowd a pause from the up-tempo beats. Once the final extended run began, all mayhem broke out, as band members disappeared into the crowd, scaled the monitor speakers or bumped along with an invited stage invasion. The set attained such a frenzied pitch that the massed festival-goers (surely almost everyone on the site had chosen to catch Clinton) united in a morass of crazed funkateers, in a truly communal bonding that's rarely experienced. Most of Clinton's shows in recent years enjoy varying degrees of greatness, so we just have to prepare ourselves for some unknown level of ecstasy.