By GLENN ASTARITA
February 28, 2013
Sign in to view read count 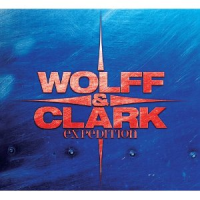 This jazz piano trio date by world-class musicians is all about the groove. Drummer Mike Clark, revered for his slippery jazz-funk beats, hearkening back to this tenure with Herbie Hancock's Headhunters, is touted as one of the most sampled drummers of the digital age. However, he is first and foremost a jazz drummer, as his resume includes stints with a list of greats too lengthy in scope to cite here. Teaming with fellow jazz giant pianist, Michael Wolff and first-call session ace bassist Chip Jackson, the trio generates a spunky set, awash with soul-jazz inflected overtones amid driving R&B, swing and bop frameworks via a democratic engagement, augmented with brute force and artful dynamics.

The band kicks off the festivities with an up-tempo spin on The Beatles' "Come Together," as Clark puts his own stamp on Ringo Starr's infamous tom-tom patterns —serving as a catalyst here and throughout. Wolff, a onetime member of sax great Cannonball Adderley's band , gives "Mercy, Mercy, Mercy" a funky makeover, solidified by Jackson's booming bass parts. Indeed, it becomes easily apparent that the band is having fun along the way.

The musicians use space as a vantage point during many of the open-air like improvisational sprees. They impart counterpoint, and gel to a throng of call and response dialogues. And on "Flat Out," the trio teeters on the free-jazz schema with a loose demeanor. But Clark dances across his hi-hat and snare drum while dishing out a complex rhythmic fabrication on "Is There a Jackson in the House," where Wolff's rippling harmonics and reverse engineering mechanisms deftly contrast Latin-jazz vamps and rock beats. But they temper the pitch and close it out with a sequence of airy and nimbly devised choruses. Other than the anticipated high-level of musicianship, the trio broadcasts a convivial aura during the course of these alluringly, revved-up musical proceedings.

Come Together; What Is This Thing Called Love?; Mercy, Mercy, Mercy; ARP; Flat Out; Song For My Father; Is There a Jackson in the House?; Hummin’; For the Love of Money; Elise.