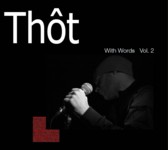 So self-contained is the modern French jazz scene by comparison with those in Britain, Scandinavia and the US, that some of its most interesting artists are practically unknown beyond their home turf. Take Thôt, the quartet led by saxophonist Stephane Payen with guitarist Gilles Coronado, bassist Hubert Dupont and drummer Christophe Lavergne. Founded in 1997, and with a handful of spin-off line-ups including Thôt Drums Project, Thôt Twin and Thôt Agrandi, the band has made only infrequent forays further afield, mostly to Scandinavia; it has performed in Britain a couple of times, but never in the US.

There is little that is overtly Gallic about Thôt's With Words Vol. 2, or the simultaneously released With Words Vol. 1, unless you count the French language spoken-word lyrics featured on one or two tracks apiece of each album. Instead, the primary influences for the group's polyrhythms and polytempi-rich music appear to come from US saxophonists Steve Coleman and Tim Berne, with a little bit of composer Frank Zappa thrown into the mix during the crunching, guitar-led power riff passages which introduce or punctuate several tracks.

Despite frequent saxophone-led discursions of prettily lyrical character, the basic vibe is edgy and complex, but it isn't "difficult." The music is undoubtedly cerebrally conceived—there are too many meter and tempo changes for it to be anything other than carefully arranged—but it's performed with in-the-moment, refined-punk engagement. Twisted, long-form bass and drum ostinatos alternate with spiky little melodic fragments, Bill Frisell-like guitar dream sequences, and nimble, dancing saxophone lines. It's the sound of surprise alright, and nothing here stays the same for long, but the album rises high above the episodic, being given instead a cohesive, structural big picture by the group arrangements.

While Thôt can rock out with the nastiest of them, the prevailing atmosphere is one of spacious, slightly off-kilter melodicism. But even during its most reflective moments, the music is shaped by drums and rhythm patterns. Like the London-based F-IRE collective, with whom it enjoys fraternal relations, Thôt understands the importance of the beat. The band's Drums Project has featured it to great effect with a group of sabar drummers from Senegal; see the video clip below. (Its work with the drummers is reminiscent of the London-based group Outhouse's work with Gambian sabar drummers—like the Senegalese, from the West African region's Wolof musical tradition—so magnificently captured on Outhouse's 2010 album Ruhabi on the Loop label).

Like the marginally denser With Words Vol. 1, recorded during the same sessions and including different takes of some of the material, With Words Vol. 2, is simultaneously visceral and thoughtful. It's an unusual synthesis and a beautifully realised one.