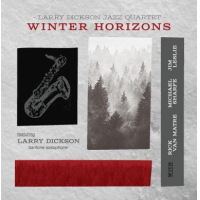 The format is basically the same as before, a series of originals (five written by Dickson) and vestments from the jazz wardrobe, at least one of which (in this case "Winter Horizons") touches upon the season to which the album is dedicated. The outcome is basically the same as well, buoyant post-bop jazz played with ardor and assurance by all hands. The album opens on a radiant note with a pair of Dickson's engaging compositions, the first of which, the hard-swinging "Blue Herring," displays the sort of charm and eloquence once associated with another well-known baritone, the late Gerry Mulligan, evoking memories of his acclaimed piano-less quartet with trumpeter Chet Baker. There's an occasional echo of Mulligan in Dickson's broad-shouldered bari, as there is of such giants as Phil Woods and Bud Shank in Van Matre's incisive alto.

The second of Dickson's themes, "Unsophisticated Lady," is a bluesy shuffle rather far removed from Duke Ellington's more "sophisticated" homage from the '30s. It precedes the lone standard from the Great American Songbook, Irving Berlin's plaintive waltz, "What'll I Do?," which is given a fresh coat of paint to embellish trim solos by Dickson and Sharfe, leading to spirited (and clever) four-bar exchanges with Leslie which interweave quotes from other familiar songs. Thelonious Monk's irrepressible "Well, You Needn't" is taken at a brisk pace, underscored by assiduous work from Leslie and everyone else, while Billy Taylor's Latin-oriented "Capricious" lives up to its name as the group slides easily into its charming rhythmic pattern. Dickson's bright, easygoing "Open for Bidness" is another highlight, as is his groovy "Sting Like a Butterfly," with persuasive solos by Sharfe and Van Matre on the former, by all hands on the latter. By this point the album is a clear-cut winner, and that's before mention has even been made of Monk's "'Round Midnight" (an opulent showcase for Van Matre), the memorable bossa-built theme from "Black Orpheus" or "Winter Horizons," whose sunny modality stands the normally frigid winter season on its head. Once again, Van Matre and Dickson are emphatic, Sharfe and Leslie snug and supportive.

With remembrances like this, it's a shame there aren't more seasons. On the other hand, Dickson and his quartets have labored admirably to honor the four we have, and Winter Horizons succeeds not only on that level but as a strong and pleasurable small-group jazz experience.