BY KARL ACKERMANN
February 5, 2021
Sign in to view read count 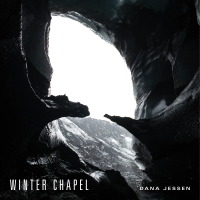 Dana Jessen is the founder of Splinter Reeds, a reed quintet, and she has performed with Anthony Braxton's Tri-Centric Orchestra. In 2017, the bassoonist/composer gave us the enterprising solo project Carve (Innova Recordings). Her mastery of the difficult double-reed instrument played out in experimental interpretations of works by modern composers. Winter Chapel is Jessen's equally adventurous second solo outing, this time with her compositions and improvisations.

Winter Chapel was recorded in early 2020 at the Oberlin College Fairchild Chapel. Jessen uses the natural acoustics much the way Susana Santos Silva utilized the space of Lisbon's Santa Engrácia's Church on All the Rivers—Live at Panteão Nacional (Clean Feed Records, 2018). The pieces are chronologically ordered as "parts." "Part One" is a physics demonstration as Jessen vibrates the air molecules with glass-breaking high pitches. She finds the instrument's low-end in "Part Two," a rumbling, layered work that flutters peacefully away. Jessen gives us more than technique here; "Part Four" is a stunningly haunting piece with an odd sense of melancholy. With "Part Six" Jessen does not attempt to close the album in tranquility. Grunts, growls and Jessen's distorted vocalizing sound like a life and death struggle among sounds, albeit an entertaining one.

Winter Chapel, while frequently a continuation of Jessen's experimentation, is not a Carve sequel. Jessen's music is as complex as it is listenable, and the improviser continues searching the many possibilities the bassoon affords. The chapel becomes a partner in the program's physics and musicality, and Jessen's technique in melding these elements is striking. Each piece stands out differently, piquing curiosity about an instrument that doesn't get the exposure it deserves, and a virtuoso musician who merits the same.