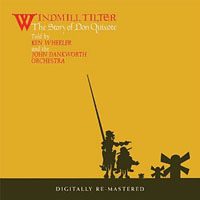 "Lost" has been a favored word in the last few years. Miles Davis' late sixties group was called lost because it did not record officially. Trumpeter/composer Kenny Wheeler's Windmill Tilter truly has been lost—until now.

Recorded in 1968, the Windmill Tilter suite has only previously been available on increasingly rare and expensive LP. Rumor had it that the original tapes had been destroyed and, while a release was promised a few years back, it never materialized. Now, BGO records has managed to cut through rights problems, producing a remastered CD with beautiful timing, as Wheeler turns 80 this year.

Wheeler—a Canadian expat with an admirable willingness to work with a wide variety of musicians—has lived in England since 1952, building a tremendously varied CV, playing music across the jazz spectrum. Possessing of one of the most beautiful tones in jazz, his playing on both trumpet and flugelhorn is contemplative and pure; there is no horn power play here, only lyricism. Windmill Tilter, inspired by 17th Century Spanish author Miguel de Cervantes' iconic Don Quixote, was Wheeler's first major work and his debut as a leader. It was also the last session played by guitarist John McLaughlin, before he left the UK, and bassist Dave Holland's first recording.

Most of the suite is played by The John Dankworth Orchestra, interspersed with two quintet tracks. The first notes of "Preamble" demonstrate Wheeler's sheer, pristine beauty, with just the flugelhorn playing across McLaughlin's guitar. Holland introduces the orchestra on "Don the Dreamer," a track that demonstrates Wheeler's strength at writing for brass. His studies in the sixties, with trombonist Bill Russo, are evident here in the flugelhornist's exploration of sonorities, using the tuba-bottomed orchestra well and giving his writing both profundity and depth as, intertwining with the rest of the brass, his scores contrast the lightness of his own playing.

Knowledge of Cervantes' book won't necessarily enhance appreciation of the music; song titles in jazz are often created after the music has been written/recorded. Here, however, "Sweet Dulcinea Blue" is, indeed, a musical portrait of the young woman that inspired Quixote in his quest. Regardless of the inspiration, it is one of Windmill Tilter's most engaging tracks, featuring Wheeler, McLaughlin and saxophonist Tony Coe—who, like Wheeler, is a master musician not widely appreciated outside the UK.

Wheeler makes no attempt to invoke Spanish music, in the way that Gil Evans did for the Miles Davis' Sketches of Spain (Columbia, 1960); there are no clicking castanets here. Instead, Wheeler is trying for something else, perhaps feeling that such an obvious correlation would not be tasteful.

For those familiar with Wheeler's subsequent work, there are few surprises here. Those new to his work will finds Windmill Tilter a good starting point. Wheeler is a unique voice as both a player and a composer. Welcome back Don Quixote, and happy 80th, Kenny Wheeler.