By DAN BILAWSKY
September 22, 2013
Sign in to view read count 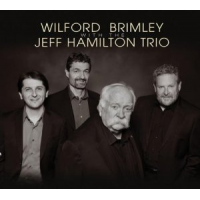 Acting and singing aren't mutually exclusive talents. The best singers, in fact, are natural born actors, inhabiting the stories set out for them in the songs that they sing. The opposite, however, doesn't always ring true; the best actors are not always natural born singers. In this day and age, the fame of the thespian has become a license to sing, with everybody from Hugh Laurie to Hugh Jackman and Russell Crowe to Russell Brand brandishing a microphone, but the results are mixed. Some can pull it off; others simply can't.

The four actors listed above have taken vocal detours into various locales, from Broadway to bluesville, but others have been tempted to visit jazzier territory instead. Joe Pesci (a.k.a. Joe Doggs), for example, put his Jimmy Scott-esque vocals to good use on organist Joey DeFrancesco's Falling In Love With Love (Concord Records, 2003), and now, Wilford Brimley is taking a run at the classics with drummer Jeff Hamilton's classy trio backing him up. Brimley and Hamilton are an odd match on the surface, but they share a love for this music, and that's all that's really required to make a go of things.

Brimley-as-vocalist comes with some drawbacks and strengths, as many musicians do. He tends to favor a form of speak singing with a vibrato chaser, which isn't likely to win over the vocal jazz set, but he also has a few important things going for him. First and foremost is his storyteller's delivery. It's clear that he gets the ins-and-outs of what the songs are saying. One of his other strengths is his ability to give the material a quaint, lived-in feel.

Hamilton and company play their part(s) to perfection. Hamilton's break away brush work and impeccable sense of swing are a joy to experience, pianist Tamir Hendelman is ever-charming, and bassist Christoph Luty is the connective tissue. Sometimes he bridges the gap between Hendelman and Hamilton, but he's just as likely to fill the spaces Brimley leaves ("A Sleepin' Bee") or simply serve as a harmonic guidepost.

The arrangements that surround and support Brimley are clever and concise, with twelve of the fifteen numbers clocking in under the four minute mark; the idea seems to be to say what needs to be said, let a quick solo or two sneak in, and then move on.

It's not likely that vocal aficionados will be ditching their Nat "King" Cole in favor of Brimley's "Walkin' My Baby Back Home" or choosing his "A Sleepin' Bee" over Mel Torme's take on the song, but Brimley's work shouldn't be discounted. He's always possessed an ability to win over an audience, regardless of the setting, and he does his best to do it again here.

Track Listing: I Wish You Love; I've Grown Accustomed To Her Face; Pick Yourself Up; I Have Dreamed; Waltz For Debby; Ain't She Sweet; That Sunday, That Summer; When I Take My Sugar To Tea; Walkin' My Baby Back Home; This Love Of Mine; Nice Work If You Can Get It; Love Letters; A Sleepin' Bee; Your's Is My Heart Alone; Bidin' My Time.