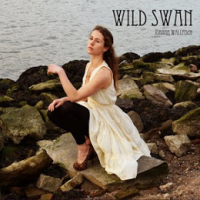 After immersing herself in the New York jazz scene, English singer/songwriter Joanna Wallfisch decided to return to the city in December 2011 to record her debut album, Wild Swan. A great decision—Wallfisch's soaring and expressive voice combines with superb playing from Big Apple musicians to create a fascinating and original set of songs.

The young vocalist cites Joni Mitchell and Norma Winstone as inspirations. Winstone is the most obvious vocal inspiration of the two, but Mitchell's quirky approach to narrative can also be heard in Wallfisch's lyrics. The musicians skilfully interpret the songs: pianist Art Hirahara adds deft phrases and flourishes that do much to build atmosphere, while Sam Newsome's soprano saxophone playing is always sympathetic.

Wallfisch's clear diction, precise tone and accent give these songs a distinctive style—a mix of English reserve and sensuality that is well-suited to the romantic imagery of "Nights Are Made For Dreaming" or "Wild Swan." On her own "I Could Tell You That I Love You," Joe Martin's spare but sympathetic double bass is Wallfisch's only accompaniment. It's a striking performance, clearly establishing the quality of Wallfisch's voice and her command of phrasing; the lyrics, with their final twists, tell a romantic tale with no happy ending. Her lyrics can also bite: over a Latin beat, "Leopard Print Shoes" tells a tragi-comic tale of two achingly hip East Londoners and their unlikely "boho chic" demise at the hands (or claws) of a mysterious wild cat. Wallfisch sports a fine pair of leopard skin shoes on the album cover: surely the song can't be autobiographical?

Alongside the original tunes Wallfisch has chosen a classy selection of covers, demonstrating a sophisticated taste and a self-confidence that should stand her in good stead for the future. She covers Jimmy Rowles "The Peacocks (A Timeless Place)," with lyrics by Winstone, sensitively. Her approach to Leonard Cohen's "Suzanne" is beautiful, thanks to drummer Rob Garcia's graceful arrangement.

Pete Townshend's "Blue, Red and Grey," from The Who By Numbers (Polydor, 1975) is a more surprising choice. It's not one of Townshend's best-known songs, nor is it typical: Townshend sings the original version accompanied by his own ukelele. There's no hint of desire for premature mortality here: it's a celebration of the simple things in life, of "every second of the day." Wallfisch's vocal is suitably light and optimistic, while Sam Newsome's soprano saxophone solo is equally cheerful and life-affirming.

The album's tour de force is "Several Times In The Past Week." Wallfisch adds music to English lyrics translated by Daniel Ladinsky from a poem by Sufi poet Hafiz. The song is a delight, its images of "happiness running through the street" celebrating love and beauty in the most charming fashion, with Wallfisch's voice and Newsome's soprano positively soaring with joy.

Wild Swan appears in the year Wallfisch completes her Masters course at London's Guildhall School of Music and Drama, and establishes Wallfisch's distinctive talent from the first note to the last.

Nights Are made For Dreaming; Windfall; Wild Swan; Blue, Red and Grey; The Peacocks (A Timeless Place); Eternal Ebb And Flow; Leopard Print Shoes; I Could Tell You; The Sea, My Sea; Several Times In The Past Week; My Wish; Suzanne.