By DAN MCCLENAGHAN
March 8, 2019
Sign in to view read count 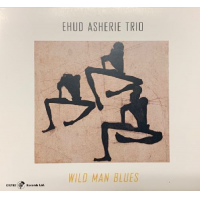 Ehud Asherie must have an old soul. The pianist's 2016 release, Shuffle Along (Blue Heron Records), explored the music from the 1921 Eubie Blake/Noble Sissle Broadway musical, Wild Man Blues. The disc at hand opens with the title tune, penned by Louis Armstrong and recorded with his Hot Seven in 1927. A relaxed and gorgeous take on "Oh, Lady Be Good" comes to us from the Gershwin brothers, from the 1924 musical of the same name.

Asherie is joined by bassist Peter Washington and drummer Rodney Green in a retro piano trio affair exploring the classic music of the early twentieth century, with a twenty-first century swagger. A saucy version of Dizzy Gillespie's "And Then She Stopped," from the 1964 album Jambo Caribe (Verve) is as modern as it gets. It would be easy to mistake this sound, on a blindfold test, for an album recorded in the 1940s, but the sound quality—excellent—gives away its modern vintage. And Asherie's playing, always reverent, exudes a passion and joy of his immersion into these sounds.

The trio doesn't stick to American-made jazz. They engage in a swing by Brazil with an up-tempo romp on "Flying Down to Rio," from the 1933 movie of the same name, and they lay down a bubbling-with-life take on "Na Baixa Do Sapateiro," from 1933.

A fine sound straight through, with—if we're counting highlights—a pair of Charlie Parker tunes, "Parker's Mood" and "Chasin' the Bird," along with the Armstrong title cut leaving he most lasting impressions. Songs that wouldn't seem to lend themselves to a piano trio treatment. But Ehud Asherie and his trio make them shine.

Wild Man Blues; Parker's Mood; Flying Down To Rio; Autumn Nocturne; Chasin' The Bird; Na Baixa Do Sapateiro; Oh, Lady Be Good; And Then She Stopped.