BY JEROME WILSON
March 8, 2019
Sign in to view read count 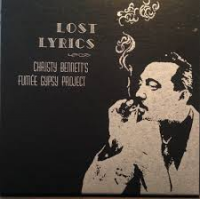 Django Reinhardt's Gypsy-flavored jazz compositions have been played all over the world for decades. A few modern musicians have added words to his melodies but few know that some of Reinhardt's works were originally written with lyrics. Vocalist Christy Bennett has spent years tracking those lyrics down. This CD presents the results of her research, Reinhardt's tunes sung with the original words.

This is one Django tribute that does not contain the guitar and violin chug of his original Hot Club of France recordings. Instead Bennett's group has trumpet, mandolin, accordion and string bass, which still comes off as authentically Parisian. It has the graceful, lilting sound you might hear in a boulevard cafe and Bennett sings in French with a creamy soprano voice that rides beautifully over the swooning rhythms.

Classic Reinhardt pieces like "Tears" and "Nuages" carry an air of gentle melancholy through the meshed dreaminess of lush accordion lines, rhythmic mandolin accents and solid bass groans with Art Davis interjecting the occasional mellow Louis Armstrong-like trumpet figure. The up-tempo "Swing 42" and "Swing 39" sound bubbly and bright, as Davis blows in the foreground next to Bennett's giddy vocals. The entire group gets to swing on "Douce Ambience," with Don Stille, Don Stiernberg and Davis all taking frisky solos over a dancing Charleston rhythm.

Elsewhere the playing and arranging gives off the whiff of exotic locales. On "Fleur D'Ennui" Christian Dillingham's bass tugs a little vamp that gives a slight Mideastern flair to the seductive melody, while "Troublant Bolero" slides by on a sultry tango rhythm. "Django's Castle"'s mood feels as warm and sentimental as a tropical breeze with Bennett's voice soaring high above the music. "Crepuscule" continues that feeling but mixes it with a touch of Old West balladry through the lonesome wails of Stille's accordion and Stiernberg's mandolin.

As mesmerizing as the instrumental side of this project is, Bennett's singing puts it over the top. Her voice glides purely and effortlessly over the melodies. As enduring as Reinhardt's music has proven over the years, Christy Bennett singing it with French lyrics brings a new emotional depth.