Ruben Machtelinckx/Frederik Leroux: when the shade is stretched

BY MARK SULLIVAN
January 17, 2018
Sign in to view read count 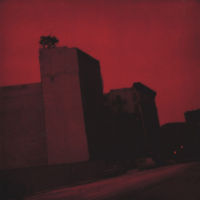 Ruben Machtelinckx and Frederik Leroux are both Belgian guitarists who have made increasing use of the banjo. They have previously performed together on Linus + Skarbo / Leroux (El Negocito Records, 2015)—Machtelinckx's project with reed player Thomas Jillings—but here they present separate solo programs. It's similar to each taking a side of an LP album. While the focus is on the banjo, it is definitely not merely a collection of unaccompanied banjo solos (although there are some tracks that are banjo-only).

Machtelinckx leads off the album (and his part of the program) with "Turdus." The first sound is a drone (perhaps from the "vibration speaker" listed in the credits) with overdubbed banjos playing a repetitive, minimalist pattern; later guitar chords are added—a gentle, minimalist sound world with banjo the unlikely instrument at center stage. The next track, "Open" is the first of two brief guitar solos, which serve as intermissions between banjo-oriented tracks. "One Morning, Ten Years Later" features chord-melody style banjo (a switch from the usual finger picking approach), while "Mirror Men" employs two banjo parts in dialog playing a minimal chord sequence, heavy on the reverb. "Spuds" is also a banjo duet, while Machtelinckx's closer "Short Sentence" features contemplative banjo chords answered by the mellow baritone guitar (another instrument that he has used often).

Leroux begins his segment ("Dawn") playing banjo with a slide (blues guitar style) over synthesized white noise that sounds like the wind, establishing a sound world of his own, which he revisits on the closer "Dusk." "The Faerie Queens" employs a bird whistle playing a melodic fragment over banjo chords with reverb—Leroux has a predilection for nature sounds—whistling sounds appear again on "Arum Lily," along with harmonium chords and an insistent banjo ostinato. "Lock My Door Upon Myself" runs the banjo through tape delay, while also adding percussion to the mix. "Woman On A Rocking Horse" finally does feature almost traditional solo finger-picked banjo, but with the twist of a stereo doubler.

At its heart this album revolves around five-string banjo played with finger picks, just like a bluegrass record. But both players subvert the banjo's usual role in different ways, beginning with the generally minimalist, repetitive sound. In fact the banjo fingerpicking style is well suited to that kind of pattern playing—it could be argued that it is more natural than it is when done on the guitar. Both players find guitar techniques like slide playing and tape delay irresistible as well, and so will the open-minded listener. Especially recommended to banjo fans looking for something different, but there's plenty of minimalist atmosphere for people who didn't even know they liked the banjo.