By C. MICHAEL BAILEY
July 6, 2020
Sign in to view read count
The British blues and rock duo, When Rivers Meet, is made up of wife and husband Grace and Aaron Bond. The pair are trying to gain traction with the release of two extended-play recordings showing off their considerable musical wares. Similar in temperament to the Lovell sisters, Rebecca and Megan AKA Larkin Poe, When Rivers Meet looks to address the same audience with their brand of American Roots Music, rendered British style. 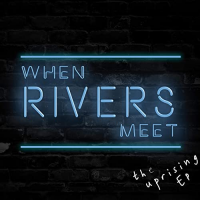 When Rivers Meet
The Uprising EP
Self Produced
2019

The Uprising is When Rivers Meet debut four-song EP. This brief taste avoids the sacred 12-bars for the most part, delivering, rather, an updated, driven form of blues-rock. To be sure, this is not Americana or roots rock. It is that music transformed through the 21st century prism of Anglo experience stripped of any Romantic pretense or Beatlesque platitude. This is music built first on a solid beat, unrelenting and assertive.

The EP opens with a Howlin' Wolf-style rhumba, "Free Man," introduced in 78-rpm lo-fi propelled by Aaron Bond's slashing slide guitar, which opens the song up. Grace belts this road song out and accompanies on her resonator mandolin, turning in a respectable solo. Disc producer Adam Bowers handles rhythm section duties, playing both bass and drums. "Do You Like What you See" begins immediately with a chopping riff from Aaron while Grace applies a glass slide to her mandolin. It is a marching tome that is as much a taunt as kiss-off.

"Tomorrow" is a completely contemporary ballad praising youth without end. The Bonds sing in unison over Aaron's spare guitar playing, a descending figure that is a musical memory element passing through the last 50 years. Saving the rock-solid best for last, Aaron lays down a soupy vibe just behind a slide tremolo in "Kill for Your Love. The song is the only true 12-bar blues on the recording, sinister in its subject and intent. Grace sings from deep reverb, adding to the song's humid concupiscence. There remains a direct comparison to be made with the other family affair, Larkin Poe, in compositional style and content, but a big enough difference to keep this new music interesting. 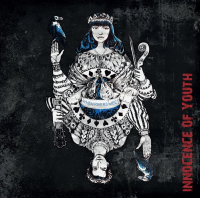 When Rivers Meet
Innocence of Youth
Self Produced
2020

Hitting the dry road, When Rivers Meet gain greater purchase on their individuality with Innocence of Youth a five song long player that extends the language they began developing on The Uprising. The title piece is driven by Aaron's sharply defined slide guitar that summons a time-hardened Elmore James, by way of every slide guitarist playing since. A slash and burn stop-time construction hones the song's drama, increasing both its sexual energy and celebration of youth. "Want Your Love" drives with a slow, Deep Purple burn, and features a demonic violin solo by the multi-instrumental Grace.

Like "Kill for Your Love" on The Uprising, "A Dead Man Doesn't Lie" grounds Innocence of Youth with another descending figure and dark and dangerous subject matter. These are songs made for show-stopping, if we ever return to traditional shows. The song's dynamic range compliments Grace's full-throated delivery and song writing, as well as her haunting violin. When Rivers Meet are evolving slowly, but in the right direction.