Marie Kruttli Quintet: What Do I Miss

By Bruce Lindsay
November 27, 2015
Sign in to view read count 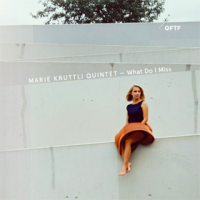 What Do I Miss is pianist Marie Kruttli's second album as leader, hot on the heels of her trio debut, Kartapousse, which was released in mid-2015. Once again the tunes are all Kruttli's original compositions, but this time round it's a quintet outing: a short, five track EP recorded in Brooklyn during Kruttli's three-month stay in New York and released on the young German label QFTF.

Krüttli's New York quintet not only adds tenor saxophone (Francesco Geminiani) and trumpet (Cody Rowlands) to the trio line-up, it also adds a new bass/drum pairing of Devin Starks and Jonathan Barber. The rhythm players impress, but it's the new instruments that have the biggest impact on Kruttli's sound.

Apart from "Hagen"—a ballad named after Kruttli's partner, highlighting Rowlands' plaintive trumpet—the titles have a certain misanthropic feel (plus the misocyny of "I Hate Dogs"). It's not a feel that's borne out by the music, thankfully. "A Very Aggressive Person" opens powerfully (not aggressively) before relaxing into a flowing, calm, mid-section featuring Starks' bass—the power returns in the final section as Geminiani and Rowlands reappear. "I Hate Dogs" is a dynamic number, often surprising in its twists and turns—it's easy to imagine cats jumping and leaping in pursuit of a ball of wool, which might help to make sense of the title too. This dynamism is also apparent on "I Shouldn't Care," thanks especially to the forward propulsion of Barber's drums. "What Do I Miss" is the only tune that never really takes off, a meandering album closer that never really grabs the attention.

A Very Aggressive Person; I Shouldn't Care; Hagen; I Hate Dogs; What Do I Miss.