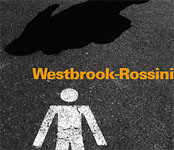 Whether you believe that opera is the loftiest manifestation of lyric art, or a bastard tradition typified by mannered singing, indifferent acting and an audience that would have Robespierre rubbing his hands in glee, there's no doubt that it has some great tunes. British composer and pianist/tuba player Mike Westbrook gathered a few of them together in the mid 1980s for this Rossini project.

Westbrook-Rossini grew out of a commission Westbrook received from a Swiss street-theatre company in 1984. The brief called for a band which could provide musical interludes for a play about the Swiss national hero, William Tell—a perambulatory band that could make itself heard in the open air, which explains the unusual seven-piece instrumentation including a sopranino saxophone, two tubas and (in the original line-up) no piano.

At the suggestion of his singer/wife Kate, Westbrook listened to the 19th century Italian composer, Gioacchino Rossini's opera "William Tell," which went on to provide the source material for the commission. As Westbrook's enthusiasm for Rossini's music grew, so did the scope of the project, and an expanded version of the original theatre commission, including pieces from Rossini's "The Barber of Seville," "The Thieving Magpie" and "Otello," was performed at Zurich Jazz Festival in 1987 (and subsequently released on a double LP). A studio version was released on CD in 1988, and Westbrook-Rossini is a re-issue of that session.

ADVERTISEMENT
It's a playful, mellifluous affair in which Westbrook celebrates some of Rossini's best known tunes (even non-opera buffs will recognize most of them), refracted through his own singular, multifaceted, musical prism. Grand opera aside, the suite draws from post-Duke Ellington orchestral jazz, jazz-rock, free improv, Maghrebi folk music, tango and (slightly drunken) Ruritanian marches. Even the Lone Ranger is acknowledged in the full-tilt reading of the "galloping theme" from "William Tell," hinted at briefly in "William Tell Overture IV" and then embraced with abandon on the disc's closing track, "William Tell Overture V."

Instrumentally, the emphasis is on richly harmonised ensemble work driven by Peter Fairclough's powerful, Sonny Greer going on Ginger Baker drums, but there are several fine solos from Lindsay Cooper on sopranino saxophone, Peter Whyman on alto saxophone and Paul Nieman on trombone. Kate Westbrook sings on three tracks—"L'amoroso E Sincero Lindoro," "Isuara" and "Tutto Cangia"—on which Mike switches from tuba to piano. Her performances, which are by turns respectful of the Italian opera tradition and subversive of it, are wonderful and stirring, highlights of the album.

Westbrook-Rossini might not make an opera fan of you...but then again, stranger things have happened.