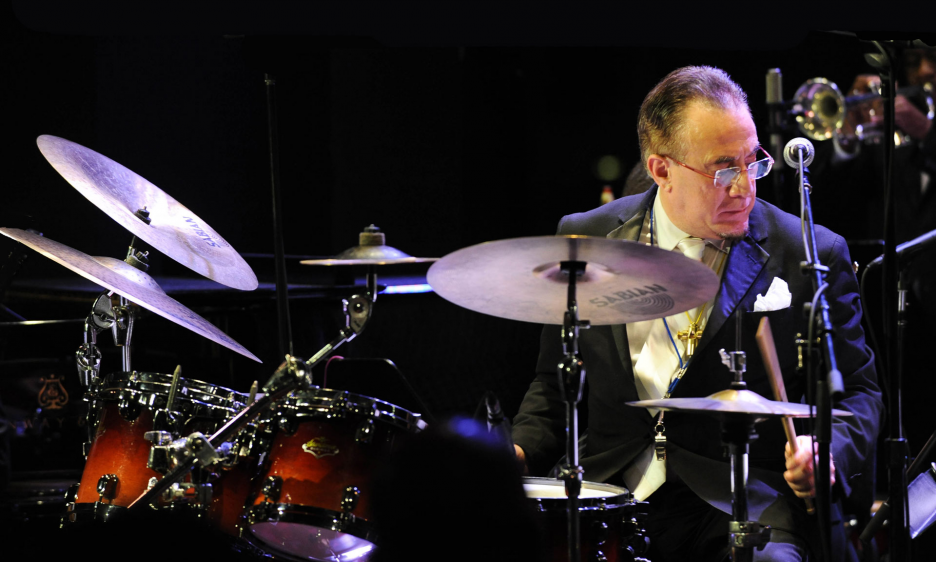 By BOBBY SANABRIA
July 27, 2018
Sign in to view read count
West Side Story holds a special place in my heart. I first saw the movie as a young boy when my parents José and Juanita took me and my sister Joanne to the luxurious Loews Paradise on the Grand Concourse in my hometown Da' Bronx in celebration of the film's 10th anniversary. At that time there wasn't anything that acknowledged the contributions we had made, let alone the existence of NYC's Puerto Rican community, other than articles about gangs and crime in relation to us. But somehow as a child I knew better. Despite the racism my parents had experienced, and subsequently my sister and I were also were subjected to, we somehow knew that our existence, our historical presence in the city had literally transformed it culturally, stylistically, and of course musically. The authors knew this as well. Yes, gang life in NYC back in the '50s forms the framework of West Side Story, how could it not, it was an undeniable reality) and of course it's based on Shakespeare's Romeo and Juliet. But that's looking at things superficially. It's a complex story of romance set in the energy of the inner city amidst racism, bigotry, territorial imperative, and what causes it -fear and ignorance, that's offset by cultural pride, humor, and the spirit of fighting for what one believes in—be it good or bad. In the lovers, Tony and Maria's case, it's about their hopes, dreams, and the ultimate power—love. Setting aside the ridiculous move by the producers to actually spray paint the actors playing the Puerto Rican characters in the film orange—something me and my sister noticed right away, and confirmed by star Rita Moreno in her memoirs—when I first heard the music I was flabbergasted. Maestro Leonard Bernstein had tapped directly into what sets our fair city apart from any other place on spaceship Earth—aché (energy), hipness, and cool.

West Side Story was a show that almost didn't get made. Its principle producer Cheryl Crawford dropped out six weeks before rehearsals were supposed to begin. Why? The show had three murders, featured warring gangs, an attempted rape, ethnic tensions, and inter-ethnic racial love. Who's going to go to a Broadway show like that? And that was just the beginning of the reasons. Till this date the score is the most complex ever written for a Broadway show combining jazz harmony and arranging technique, Latin styles, orchestral, chamber music, ballet, modern dance, lyric opera, and made listeners ask the proverbial question, "What the hell is a tritone?" the mysterious interval heard between the first two notes of the opening three that are whistled. To top it off the dancing would push the boundaries of modern choreography.  And then there was the biggest question. Where in the hell were you going to get dancers who could not only act, but be able to sing polyphonic contrapuntal melodies and harmony? Although vaudeville and Hollywood had produced specific artists who could do all three of these things, the level of virtuosity required for this show was beyond the norm of the day. It set a standard for Broadway creating what today is known as the triple threat.

Critics of the film, particularly in the Puerto Rican intellectual community, instantly stated that the film demeans us, that it portrays us as savages, heathens, and gang bangers. Some scholars have even stated that West Side Story is akin to D.W Griffith's Birth of a Nation. Really? Notice the first entrance of Bernardo Nuñez (yes the main characters all had first and last names), the leader of the Puerto Rican Sharks. He is clearly the handsomest male character in the film. He walks tall with pride and elegance. Ever notice the colors of the clothes he is wearing when he first appears? They are black and red, the colors of Elegua—the messenger and owner of aché (positive energy), the guardian of the crossroads in the West African Nigerian Yoruba-based religion of Ifá. He represents the beginning (red for life) and the end (black for death). Syncretized with Catholic deities in Cuba, in order to mask it from the authorities, the religion became known as Santeria and today it is the most important and most practiced African-based religious belief system in Latin America, let alone Cuba, Puerto Rico and New York City.

Its rhythms, along with other African-based religions like Palo, as it is practiced in Cuba and New York City, permeate our Afro-Caribbean culture and music. Elegua is the most complex of the deities (orishas, super beings) in Santeria for he is the gateway and owner of aché, the supreme energy "force" that permeates the Multiverse. Yes, "The Force" Star Wars fans. George Lucas, Star Wars creator, studied the teachings, writings of scholar, mythologist Joseph Campbell and tapped into this for his concept of "The Force" for the Star Wars mythology, but that's another story.

Elegua has many "caminos" (roads) and is considered so complex by his followers that he can never fully be understood. He is ultimate mystery, and as I stated before, the owner of and gateway to aché. Revered in Cuba but feared in Brazil in one of his manifestations known as Eshú, in any ceremony, after first honoring ones dead ancestors, he is the first orisha that must be praised. In Africa he is represented by a young child with an erect penis for he is pure energy and always ready for action. But in Cuba he was syncretized with St. Anthony or El Niño De Atocha, again in order to mask from the authorities that he was being worshiped by devotees. He is forever present, particularly at crossroads, in the corners of every room, for he is the spy of the gods (orishas).

Ever notice in the film what Riff Lorton (leader of the Jets) walks by in the opening scene before Bernardo's entrance? It is a young child drawing concentric circles in chalk on the playground cement. A young child? Concentric circles? These are images associated with Elegua and his infinite energy and mystery. Like a scene out of the Twilight Zone, from the opening haunting whistle you know you are entering another dimension of sight and sound that is beyond the norm -it is New York City. It leads to Bernardo's majestic entrance as he leads the Sharks, as an Elegua-based warrior, into the volatile territory of the Jets. Did the filmmakers know about these West African/Afro-Caribbean cultural references? Knowing Maestro Leonard Bernstein's familiarity with Latino culture, a strong case can be made for it. But It doesn't matter, in the mythology Elegua is always present whether one knows it or not.

Ever notice upon looking at the Jets that one can see that they are disheveled, are not elegant in their movements and are in fact slovenly in their appearance? They're dancing is in stark contrast to the Puerto Rican Sharks. The Jets movements are athletic, acrobatic, almost brutish and animalistic in its power representing their dominance of the neighborhood. It is their turf and they will fiercely defend it. It is juxtaposed by the long elegant lines of the brilliant choreography Jerome Robbins and Peter Gennaro came up with for the Puerto Rican Sharks. Don't believe me? Look at the scene on the roof as "America" is sung by the Puerto Rican Sharks. Also notice the unique lyrics as the point vs. counterpoint case is made by Anita and the rest of the Shark debs (debutantes, girlfriends) for living in America over their previous life of poverty on the island. They embrace the American dream and all its amenities right down to having a washing machine to which they sing, "Everything's all right in America!" to which Bernardo and the rest of the male Sharks answer with the ultimate reality check by singing sarcastically, and truthfully, "If you are all white in America!" It's all done to the rhythmic cadence of Mexican huapango. Those who criticize composer Bernstein's choice of this musical style don't get it. Members of the Puerto Rican community in New York City were fans of the Mexican-made films that permeated Spanish language movie theaters in New York City at that time. Our parents were exposed to that culture and its music and became fans of it just as much as they were of the jibaro music of the island from where they had migrated.

The case could even be made that composer Leonard Bernstein was part of our community. Certainly the Jewish community in New York City were fans of all things Latin—from the music, dance, to the food—and they were the only ones who would rent housing to us. Bernstein was fluent in German (a language once spoken in Mexico), Yiddish, Hebrew, French, Italian, and Spanish. His wife, actress and pianist Felicia Montealegre, was born in Costa Rica and raised in Chile. They frequently would go to the Palladium Ballroom—The Home of The Mambo on West 53rd Street and Broadway—to soak up the sounds of Machito, Tito Puente, and Tito Rodriguez. He was as cosmopolitan as they come. In other words, he was hip!

His intimacy with the Latin dance music scene in Manhattan through his frequent visits to the Palladium is demonstrated in the gym scene where Tony and Maria meet and fall in love at first sight. It is yet another example of how we are presented with majesty and elegance in the film. In the opening circle dance, the master of ceremonies (the well-meaning social worker Mr. Glad Hand) asks the couples to form concentric circles, boys on the outside and girls on the inside. He instructs them to go round and round in opposite directions until the music stops. Once it does they are to dance with whoever is in front of them. Riff, leader of the Jets exits out first and just nods his head, literally ordering his deb, Gina Trikonis, through this silent gesture to join him on the floor. In effect he owns her. Bernardo, leader of the Sharks exits next. Instead of ordering his girl Anita to join him, he motions with an outstretched arm. He's not ordering her but in a chivalrous manner inviting her like a respectful consort to join him as an equal on the dance floor. She accepts with her left hand in his right and makes one promenade around him elegantly holding out her skirt with her left hand. It is a movement that anyone who is familiar with the Puerto Rican danza or Cuban danzón knows well and a direct visual demonstration that the Puerto Ricans have class. The circle breaks when the music stops and both Sharks and Jets realize they must dance with each other but to no avail. War on the dance floor ensues as the mambo explodes and the warring tribes face off by dancing. 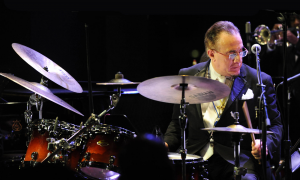 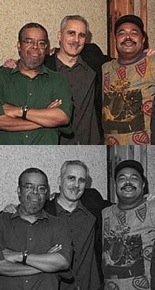 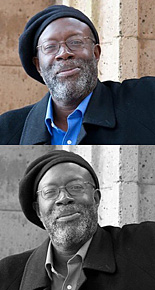