Aaron Shragge: This World of Dew 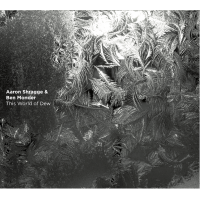 The distinctiveness of This World of Dew stems equally from Aaron Shragge's technical mastery of the flugelhorn, dragon mouth trumpet, and Japanese Shakuhachi, his deep understanding of the traditions underpinning the Japanese aesthetic, and guitarist Ben Monder's ethereal, elongated harmonic syntax.

Combined, these elements produce an immersive experience permeated by the sensibilities of the floating world; a sound-stage directly linked to the meditative practice of depicting and penetrating the esoteric pillars of impermanence, transience, and distillation that are so central to the works of the poets around whom the album revolves.

Inspired by historical and modern era authors ranging from Issa and Basho to Charles Bukowski, the album presents 14 original compositions, including the six stanza "World of Dew Suite." Forming the heart of the album, the suite is a profoundly realized statement. Playing to equal effect on the traditional Shakuhachi, flugelhorn, and the dragon mouth trumpet—a custom-designed instrument—Shragge's playing is resonant, steeped in longing and the peculiar melancholic sensibility known in Japanese as "mono no aware," literally the "awareness of things."

While comparisons between this distinctly Japanese artistic phenomenon and the blues are debatable, the interplay between Monder and Shragge certainly presents strong evidence of a common spiritual language between the two cultures.

Particularly compelling in this regard is the piece "A Tiny Boat." Composed of Monder's gossamer guitar lines and Shragge's mournful calls, the piece's notes float like petals falling in slow motion, forming a prolonged dirge, the structure slowly revealing itself as a deconstructed blues.

This is just one example of the subtle complexity and artistic depth that defines the album. Tone by tone, bent note by bent note, Shragge and Monder submerge the listener in a prolonged aural meditation, weaving a sonic tapestry as ephemeral as mist and as acute as the splash of a stone hitting water.

A remarkable achievement, This World of Dew is a testament to musical innovation and the boundlessness of individual expression.