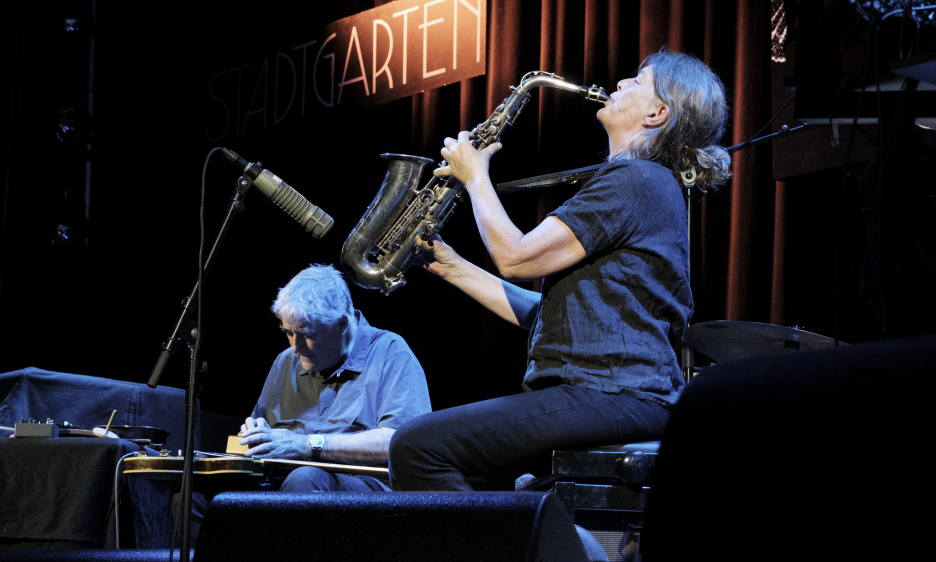 In the usual times, Week Of Surprise would be Night Of Surprise, with all of its sonic wonderment compressed into a kaleidoscopically overlapping sequence, where chance encounters were actively encouraged. In virus times, a more sober incarnation came into being, expanded in days, reduced in timetable complexity. Early in the week, Surprise opened at Stadtgarten, one of Cologne's prime alternative music venues. Then, as the weekend approached, additional performances took place in the Martina Kaiser art gallery and the vaulting Christuskirche. Programmed by Thomas Glaesser, who also provides input for Jazzfest Berlin, the Surprise begins with jazz and improvised music, then billows out towards electronics, moderne composition, judder-rock, and traditional Turkish song.

French guitarist Julien Desprez operates multiple facets, but his chief tension-outlet is Abacaxi, a trio with Jean-Francois Riffaud (electric bass) and new member Francesco Pastacaldi (drums). Key elements are a radically stuttering rhythmic attack and a symbiotic relationship with light, triggered by the leader's dancing feet, as he manoeuvres around his prodigious semi-circular effects pedal array. The arrival of Pastacaldi into the ranks is probably what's veered them more towards a frenetic funk complexity, compared with their rockier state a few years earlier. Yes, there still used to be a funk direction, but now it's magnified. During "Mainstream Desire," Desprez switches tones schizophrenically, literally hopping between guitar sounds and textures, often for each line, then back again, alternating to provide a stroboscopic switch of qualities. Along with Riffaud, he's expanding the palette far above what's expected from a trio formation. Desprez sounds like a robot with a stake through its heart. Abacaxi have become a sludge power trio! The fastest sludge in town. Next, the trio gets down into some deep, dark dance motion, with a mechanoid pulse, multiphonics that sound like they're reared from bagpipe sources. It's almost humorous in its extremity, nervy to the maximum.

Fred Frith (guitar) and Lotte Anker (saxophones) appeared as part of their German tour, firstly performing as a duo, and then being joined by three guest improvisers for the second set. Anker started on soprano, Frith on wiry brush, soon graduating to actual picking and strumming. She led, and he chose sympathetic tones for her horn lines. A large metal pan looked like being a new item in Frith's collection of string-extension objects, perfect for aligning with Anker's high trills. A heavy riffing outbreak took Frith closer to almost conventional guitar activity, with Anker offering lower tones by picking up her alto horn.

The first set seemed quite brief, soon reaching its conclusion, and likewise the second, which halted just as the guests and hosts were all beginning to knit together. Angelika Sheridan (flutes, including bass version), Mariá Portugal (percussion) and Udo Moll (electronics) joined, then the improvising amongst strangers began. Moll's output immediately became the most exciting element, with his diverse panoply of scuzz, bleeps and low scuttling, but Frith capitalised on a sudden quiet patch to make strums with a church organ quality, then puffed finger-tapping mercury slivers towards a sparse, ghostly stretch.

Pat Thomas seized the opportunity to present an atypical set, solo at the acoustic piano, but devoting a sizeable portion of time to his electronic laptop compositions, which were probably sprouted from improvisational sources. The Oxford-dweller chimed or tolled with his keys, savouring an initial sparseness. Phrases returned, mulled over, questioned, and when Thomas did strike with force, he often allowed the tone-clusters to decay, lingeringly. Via his laptop, Thomas plummeted, bathyspherically, into deep sonic channels, with some arrestingly curved wave-shapes. There was a chorus of vaulting voicings, with cello-sympathetic tonalities. Moaning, crying, mournful, distressed, this glitch chorus acted as a substantial contrast to his acoustic relationship with the piano. A web dripped acid amid violent squealings. The Thomas approach to electronics harked back to old school electroacoustic works, streaked with a cosmic 1950s and '60s palette. Thomas made ice-block piano strikes, rapidly smashing into splinters, lashing the ivories, evolving towards an equal duo between piano nakedness and laptop emanations. Called back for an encore, Thomas bounded into an accelerating free-ragtime rush, matching traditions that ought to dwell together more frequently.

For pure electronic adventure, we found Thomas Ankersmit in the Christuskirche, its high white walls concentrating the audio and visual fields. He operates his wire-infested modular synthesiser, inspired by the individual settings of performance locations, this holy space possessing particularly strong reverberant qualities. Ankersmit remains influenced by sonic artist Maryanne Amacher, his "Perceptual Geography" working-title derived from one of her pieces. Ankersmit uses some pre-prepared material, to support his in-the-moment live-ness, saying that he was worried about a performance in a white space, in pure daylight. This was a 4pm show. Perhaps he'd have to work harder on the atmosphere front. He invoked, not surprisingly, the deep tolling of bells, but was also amenable to explosive sounds, which he set scooting around the multi-speaker system. Ankersmit's personal landscape spread out a growing hum, wobbling as it built up to a churchquake. Bass was married to a high pulse, then an airstream exhalation vibrated in sympathy with some unknown metal object. Indoor storm conditions prevailed. Under a grim dome, Ankersmit made a rippling-wash climax, getting faster in its organ-tones, hulking up into a gargantuan swirling needle. He earned his rewards as a visual artist, via sonic means...