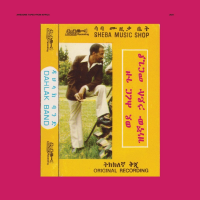 It is not long ago that Brian Shimkovitz could celebrate the 10 year anniversary of his blog, Awesome Tapes from Africa, where he has posted a steady stream of obscure, but beguiling records with eclectic African music originally released on cassette. The blog quickly grew into becoming a favorite of listeners around the world, and in 2011, it also became a record label.

One of the most prominent artists on the label is Ethiopian accordionist and keyboard-player, Hailu Mergia. The re-release of his lost masterpiece Tche Belew was one of the highlights of 2014, so it is an unexpected gift that Mergia has discovered another forgotten record in his personal archive: Wede Harer Guzo.

The record was originally released in collaboration with Sheba Music Shop and Mergia's own cassette copy is the only known source for this music. Therefore, the tape is used as the master, which means that the sound is not exactly state of the art, but the tape has been cleaned up professionally and the sound is perfectly acceptable.

Whereas Tche Belew was recorded with his group The Walias, Wede Harer Guzo showcases another group that Mergia worked with, namely The Dahlak Band. The group had its residency at the Ghion Hotel in Addis Ababa and was influenced by modern soul. This is most clearly shown on the swampy organ groove, "Sintayehu," with funky drum-breaks and a wordless vocal chorus.

The elegant use of vocal arrangements is one of the things that makes the album soar. It is especially lovely on the gently shuffling "Embuwa Bey Lamitu" where the words of the title are repeated as a chant. Abera Feyissa delivers an irresistible bass-groove and Mergia shines with an organ solo where the Ethiopian music scale is shaped into dancing musical arabesques.

Wede Harer Guzo is not as instantly catchy as Tche Belew, but it is an album that grows and reveals its depth and beauty. Traditional Ethiopian music and modern soul and funk are united on deep grooves and the result is an album that deserves its place in Mergia's canon.