By JEFF STOCKTON
February 8, 2007
Sign in to view read count 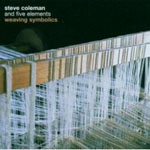 Philosopher, conceptualist, theoretician and supremely original alto saxophonist Steve Coleman has issued more than twenty albums over the last twenty years under his own name, all of which helped perpetuate his notion of the M-Base (macro-basic array of spontaneous extemporization) collective. Less a musicians' club than a way of thinking about music creation, Coleman and his band employ M-Base to combine structure with improvisation on Weaving Symbolics and deliver music that fuses funk, soul, world beat and jazz.

The song titles betray a New Age sensibility, but the music is complex yet accessible, and presented with passion coated in a professional sheen. This prodigious two-disc set offers a collection of nineteen cuts (totaling two hours) laid down in Brooklyn, Philadelphia and Salvador, Brazil—and the diversity of location is mirrored by the variety of band configurations.

"Ritual is performed by a septet (where three percussionists count as one); there's also Coleman solo, an alto/voice duo, a trio for alto, trumpet and trombone, and a sax/bass/drum trio anchored by Eric Revis and Jeff "Tain Watts, who play with their usual profound swing and dark melodicism. Pianist Jason Moran and drummer Marcus Gilmore round out the trio on "Tehu Six and "Tehu Seven ; Moran's distinctive touch and tasteful mastery shimmer.

The larger group tracks were recorded in Brazil and are kissed with a hint of samba, along with exotic touches of guitar and flute, but your overall response to this music will depend on your taste for the wordless scatting vocalese of Jen Shyu, whose agreeable tone places her somewhere between Cassandra Wilson and Irene Aebi, but tends to distract from the excellence of the various bands, otherwise unadorned and unbridled.