Various Artists: We Out Here 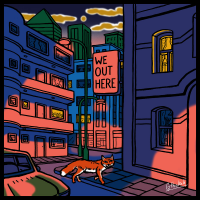 This vivid snapshot of young London's jazz scene, featuring nine bands and a collective pool of 35 musicians, contains close to an hour of daring and uplifting music—from rebooted spiritual-jazz through abstract experimentation to Afrobeat-flavoured dancefloor urgency, a rich mix further enlivened by shots of grime, hip hop and funk. It was recorded over three days last August under the light-touch supervision of its musical director, the saxophonist and clarinetist Shabaka Hutchings, who leads his own line-up on one track and is heard on two others. Though still in his early 30s, Hutchings is a kind of wise elder to the musicians featured on We Out Here, most of whom are in their mid 20s and a couple of whom are in their late teens.

The disc explodes the myth that British jazz is in the death grip of caution and conservatism, on a one-way journey to becoming a museum exhibit. As Teju Adeleye writes in her excellent liner notes, "This record is a celebration of survival and innovation. Of jazz as ritual, as collective improvisation and DIY ingenuity." It reaffirms jazz's potential as politically engaged protest-music and as an art form whose creation and evolution would be as nothing were it not for the historical and continuing contribution of black musicians. The balance between black and white players on We Out Here is weighted towards the former, though not overwhelmingly so.

As for the dead hand of caution and conservatism, some back story....In 2013, the great British saxophonist Larry Stabbins retired. It was a considerable loss. Since the 1980s, with Working Week and other bands, Stabbins had pulled off the difficult trick of keeping one foot in a fierce post-John Coltrane improvising tradition and the other in jazz as accessible dance-music, often doing both at the same time. Explaining his decision to retire, Stabbins talked about his disconnect with Britain's Arts Council-manipulated jazz-ecology, and the Arts Council and other funding bodies's prioritisation of outreach work over the nurturing of music and musicians. "The music scene has changed drastically over the last 50 years," said Stabbins, "and the cultural role of jazz in particular is entirely different. It attracted me [in 1962, when as a young teenager Stabbins heard Coltrane's Africa/Brass] because it was rebellious, alternative, had a veneer of danger to it...and identified with the underdog—black people in racist societies—and had a generally anti-rightwing/authoritarian political agenda...it also felt groundbreaking and exploratory. None of that seems to me to apply any more." Stabbins explained that he became a jazz musician to play music, not to become a social worker.

Stabbins's reasons for retiring were heartfelt and honourable—and, undoubtedly, elements of British jazz were in 2013 ossified and/or in hock to the public-funding bodies, and still are. But a fresh cohort of artists is emerging, bringing with it all the passion which Stabbins felt when he started out. We Out Here is irrefutable proof that the rebel spirit of jazz is alive and well, unquenchable and fighting back.