Daniel Bennett: We Are the Orchestra

BY JAMES FLEMING
October 14, 2018
Sign in to view read count 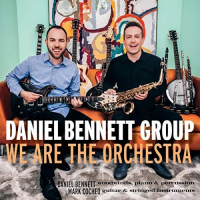 The music rolls out of the speakers as a breeze shimmers over the prairie. Evoking scenes of broad, open grasslands. The Daniel Bennett Group's We Are The Orchestra plays out like a collage of genres and cultures: Italian opera, American jazz and folk, tinges of East Africa. A vivid tapestry woven from disparate threads. That rather than rehashing musical history, hints at the possibilities of the future.

On a track such as "Theme From Ernani" those far off worlds meet and their borders blur together. "Ernani" is an opera by Italian composer Giuseppe Verdi. But in the hands of Bennett and his collaborator Mark Cocheo, it becomes a sonic alloy of jazz and classical, dashed with pop. A whole greater than the sum of its parts. After the long, snaking opening theme, Cocheo skates into his guitar solo. Sneaking subtle and sharp stings in between the rounded, chiming runs and arpeggios. From the brilliant album opener "Loose Fitting Spare Tire" onwards, his style sews seemingly polar influences together. On his fretboard, jazz virtuosity meets folk's understatement. And the result is a sound coloured with shades both exotic and familiar.

Without resorting to ham-fisted word painting, Bennett's saxophone and woodwind playing summon up images of lush, horizon-spanning expanses. His compositions and arrangements favour lengthy ensemble themes. That meander and flow like a river through a valley. The sweeping rhythms roll as if they were cameras panning across the plains. A long, slow shot that captures all the fine detail of the gentle wilderness and its music. The grating reeds of "Inside Our Pizza Oven" however evoke a different wilderness. Atop Cocheo's clashing acoustic guitar chords, Bennett stirs up the spirits of the desert. The dry, harsh winds and coarse sands stalked by coyotes and rattlesnakes. The hypnotic opening figure loops on itself like a serpent eating its tail. Before it slithers into its solo. Bennett opens with staccato stabs of notes. And he keeps the phrases short, and disjointed. Ending on a piercing high that bleeds over onto the opening theme's return. Fading out as it reasserts itself on the airwaves.

We Are The Orchestra is a smorgasbord of musics. Bennett and Cocheo have rejected any misguided notions of "purism" in favour of exploration. Rather than colonising the different genres and forcing them to adhere to their own mould, they have woven all the different styles together seamlessly. Leaving not even the faintest of scars behind post-operation. The world grows smaller every day. With peoples emigrating from one place to the next, bringing their cultures and musics with them. We Are The Orchestra mirrors this movement by distilling different styles into a new, modern sound. But without diluting any of their natural characteristic attractions. If all peoples could exist alongside each other as harmoniously as the genres do on here, the world would ascend to a utopia. And its only disturbance would be the wind through the prairies.