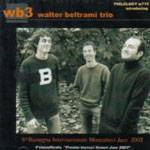 Scan the reverse side of this CD and you're likely to think that there's been some kind of printing error. Tracks by Wayne Shorter (two), Sam Rivers, Joe Henderson (two again), John Coltrane—saxophonists all. And yet Walter Beltrami is listed as a guitarist. Surely this has to be a mistake?

The question is still there once the disc is spinning and it's become quite evident that, yes, Beltrami is indeed a guitarist. There is no particularly "saxophonish" quality to his playing. "Ju Ju," for example, doesn't have the bite of the Shorter original, the bumpy topography of "Isotope" seems flattened, and the driving impulse behind Henderson's "Inner Urge" feels like an altogether darker one. Then there's the matter of Beltrami's tone. His guitar sounds like he's buried the amp under heavy blankets. The notes appear thick and muted.

But acoustics are only one part of the equation. The compositions themselves are what appealed to Beltrami, and whatever link outside of their chosen instrument might exist between these disparate songwriters, he has identified and tried to capture it.

Along with his bandmates, bassist Roberto Bordiga and the remarkably young drummer Emanuele Maniscalco, Beltrami has done an intelligent job of assimilating these songs into the guitar trio repertoire. This typically means making them more concise—often by as much as three or four minutes—and channeling the punch from the sax into the bass and drums, or taking its romantic silkiness and translating that into rich guitar chords.

Beltrami's style is delicate (albeit one occasionally rendered a bit too delicate by its aforementioned muted tonal quality) and softspoken, and yet it's this softspokenness that, somewhat paradoxically, prompts the listener to pay closer attention. There have been many, many renditions of Rivers' "Beatrice," but on this one Beltrami is able to strike a unique balance between tender confession and reticence, as if he were willing to reveal some of his emotions but quietly resolved to keep others to himself.

Maniscalco is generally quite assertive on drums and makes ample use of the whole kit. On Shorter's "E.S.P" he's everywhere, staccato and splash, a blur of cymbals, snare and tom; but even the more subdued ballads (including his own "Song for Giulia") get more than just basic brushwork. Bordiga offers some great contributions both as an ensemble member and a soloist, but he doesn't always draw a strong, resonant sound from his bass to compensate for Beltrami, with the result that the drums come to overpower both string instruments.

There is no shortage of talent or ideas on this debut. It's more a case of settling in, each musician finding his groove, so to speak, on his respective instrument (both Bordiga and Maniscalco formally studied very different primary instruments than the ones they play here) and adapting to his role in this relatively new trio. This is a worthwhile disc, then, but it's their followup we will be waiting for.

Visit Walter Beltrami on the web.