The Wood Brothers: Ways Not to Lose

BY DOUG COLLETTE
March 2, 2006
Sign in to view read count 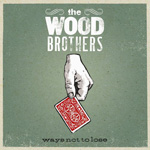 As the bassist in Medeski, Martin & Wood, Chris Wood is the group's secret weapon. Until this collaboration with his brother Oliver, where the siblings rediscovered their fascination with blues and folk music after a series of dates under the proverbial radar last year, he hadn't the visibility of his peers, based on collaborations with Warren Haynes and The Word, or other independent projects, like the ones on Martin's Amulet Records.

It's little wonder then that the music from the Wood Brothers is not, in a sense, what you might expect from a man with such an expansive vision in his other band. But the simplicity of Ways Not to Lose must be doubly refreshing for Chris Wood, for that very reason. Right from the start of "One More Day, Oliver's voice is reminiscent of no one so much as Leon Russell in its reedy drawl, but the man can wail as well, as he does on "Tried and Tempted. His joy to be alive in the moment is nowhere more apparent than on "Chocolate on My Tongue.

The uncomplicated structure of such songs as "Luckiest Man belies the intricacy of the Wood Brothers' musicianship here, especially as you hear the way Oliver's dobro work intertwines with his brother's acoustic bass. For his part the latter eschews the spotlight; his blink-of-an-eye breaks on "Atlas are virtually his only concession.

The comparatively low-wattage electric guitar on "Glad only reinforces the understatement at the heart of this disc. The same approach reappears on "The Truth Is the Light and "Where My Baby Might Be," just where Ways Not to Lose needs a change of pace. Kenny Wollesen's percussion on a handful of tracks, including "Time to Stand Still and "Spirit, is just further evidence of the Woods' judicious approach to this project.

The presence of John Medeski as producer may seem indiscernible as you listen, but that's no doubt the way he and the brothers wanted it. Nevertheless, his familiarity with sacred music—the Campbell Brothers, the Word—no doubt encourages the heartfelt likes of "Angel Band, where Oliver testifies righteously and the playing radiates the warmth of kinship, as well as a stalwart spiritualism.

While Ways Not to Lose remains low-key for its duration—and thereby serves as a fine antidote to the overblown show business façade of mainstream music—it nevertheless builds momentum as it progresses to its logical conclusion in the form of "That's What Angels Can Do. This earnest homily will effectively quash any thoughts that the Wood brothers are taking this project lightly, and more important effectively invite you to hear it again (and again... and again).

One More Day; Tried and Tempted; Luckiest Man; Glad; Chcolate on My Tongue; Atlas; Time to Stand Still; The Truth is the Light; Spirit; Angel Band; Where My Baby Might Be; That