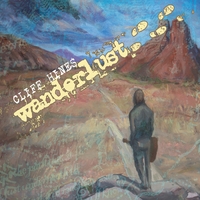 "Guitarist/vocalist/composer Cliff Hines is a product of this environment [New Orleans], but he's also a man of his own time. He mixes, merges and melds many a style into his musical cauldron but, most importantly, he captures the zeitgeist of 2013."

Listening to a bootlegged performance of Traffic at San Francisco's Winterland 01/26/1973 confused the issue when it melded into Hines' opening piece, "Brothers." Searching electric piano, finding tenor saxophone, lengthy instrumental consideration. There were many similarities between this 40-year old Traffic and Cliff Hines, save for the superior sonics of the newer Hines recording. Both groups mix, merge and meld styles seamlessly into an interesting cohesive whole. Note for future reviews: listen to different artists, one at a time.

Hines is part of an edgy group of musicians from New Orleans existing among the molecules shooting off the cutting edge of musical thought. Hines is closely associated with New Orleans vocalist Sasha Masakowski, whose recent Wishes (Hypersoul, 2011) broke as many parameters and perimeters in the Cradle of Jazz as Hines' offering does now. This is not the jazz of Joe King Oliver or Louis Armstrong, but it is the inheritance of them.

Hine's Wanderlust is essentially a suite that deftly incorporates all of the traditional jazz instruments with electronics, sequencing and creative vocalese (courtesy of MasaKowski). Hines' musical ideas develop and move quickly in an orderly fashion that never reveals haste or sloppiness. He favors simple lyrical figures played over and over with soloing weaving in and out of this harmonic scaffolding. This is complex music rendered as art, readily enjoyable and very easy to understand.