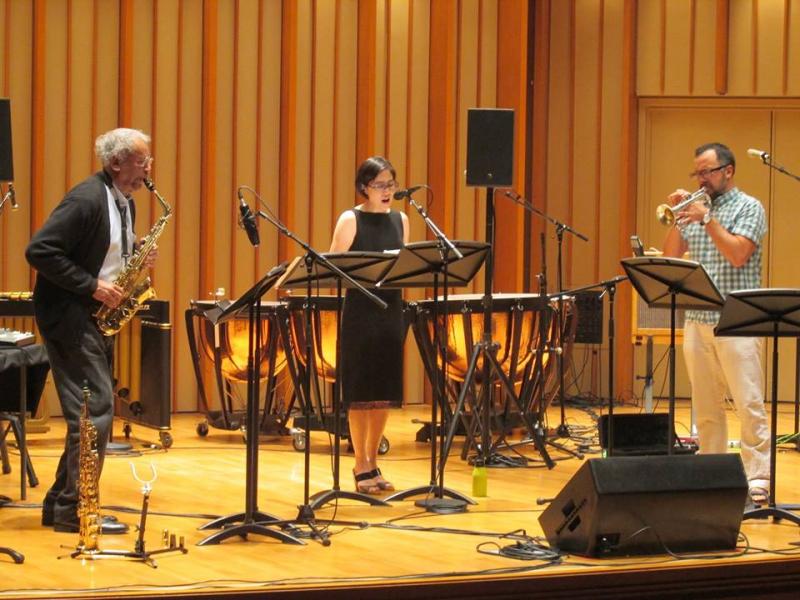 Smith's Silver Orchestra reimagined several compositions from his Occupy The World (TUM Records, 2013) record, augmented by video art projected onto a huge screen in the gorgeously-appointed and acoustically-pristine Zipper Hall at the Colburn School of Music. Spending most of the evening functioning as conductor, Smith began "Crossing On A Southern Road (A Memorial For Marion Brown)" with haunting violin harmonics from Shalini Vijayan and Mona Tian over the rich tuba ostinato of Luke Strom, as the rest of the orchestra cycled waves of dissonant textures in response to the dramatic sweep of his arms. A very brief laptop-electronic solo from Mark Trayle burbled like a 1960's Bell Labs/Sci-Fi soundtrack and cellist Ashley Waters contributions were consistently compelling.

This was not music organized around solo features however, and the interlude with string quartet plus bass clarinet that foreshadowed the composition's conclusion, with wide intervallic melodic shapes, defined the unsettling melancholy with appropriate tension.

The sprawling "Occupy The World For Life, Liberty And Justice," hovered and rumbled with huge, Wagnerian clouds, setting up Smith's lone trumpet expository—a searing essay of strangled shrieks, bursts of alacrity, smearing trills and blistered multiphonics. Rolling crescendos toggled against passages of quietude as the music sought to balance itself between siren-feedback string sonics and stark patches of densely harmonized melody.

Smith's portion of the evening came to a conclusion with "Mount Kilimanjaro," a stunning feature for long-time double bass virtuoso associate John Lindberg, whose deep indigo bowing moaned like a leviathan and buzzed like an agitated hornet's nest over orchestral washes and elephant blares cued from the gestures of the undersung genius.

It was particularly gratifying to notice that the hall was packed with fans eager to hear the kind of bracing, uncompromising music associated with these master-musicians. Braxton appeared with just three horns in tow: alto, soprano and sopranino, plus a laptop eking out discrete electronics. He began on soprano, instantly orbiting with the lithe, wordless vocals of Kyoko Kitamura and Taylor Ho Bynum's simpatico trumpet.

This was an evening of seamless expression. Despite a virtuosity factor that bordered on the unbelievable—the Braxton group rarely set out to create mind-boggling solos—it was much more like a three-way conversation that ranged from sensitive dialog to hypertensive crossfire. Braxton switched to alto and diverted into a course that balanced acidic squiggles with startling, circular-breathing velocity. Bynum inserted his mouthpiece into a trombone and proceeded to wail on it like it was a piccolo trumpet—all the while, Kitamura chirped and soared, giggled and roared with an incredible range and laser intonation that made Bobby McFerrin sound like Iggy Pop.

Braxton's well-documented timbral manipulations were equally drawn with moments of extreme lyricism—he can purr with a honeyed hush and scream with bloodcurdling anxiety, for frightening contrasts. Enough cannot be said about the stunning abilities of Ms. Kitamura—she functions at the highest instrumental level and was able to deal with pages of dense notation, acrobatic intervals and intricate layering with devastating surety. Bynum's many years with Braxton have paid huge dividends—their dual improvisations were often so closely linked that it was difficult to tell who was playing what, and his monstrous chops acted as a generative engine into deeper levels of abstraction for all three musicians.

Now that he is retired from a 28-year teaching career, one can only hope that Mr. Braxton will visit the west coast with more fidelity—much respect is due to the founders of Angel City Arts, Rocco Somazzi and violinist Jeff Gauthier for having the vision and wherewithal to bring him out to Los Angeles.