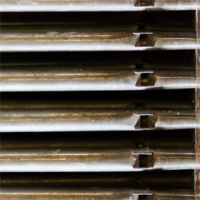 This a beautiful and elegiac record but one that is not afraid to walk in the shadows. Other artists have utilised the combination of saxophone and organ—John Surman and Howard Moody's Rain on the Window and Jan Garbarek and Kjell Johnsen's Aftenland spring to mind. However, Kit Downes and Tomas Challenger's Vyamanikal is quite different in its approach.

This duo of church organ and tenor saxophone focuses less on form and more on the purity of sounds themselves. Form emerges later through a number of different processes. Here, the saxophone melds with the organ as an additional, if errant pipe. In a sense, these two musicians are more interested in the micro-sounds and overtones produced by their instruments than in standard notes. The music is essentially slow-moving, yet at times has a majesty all of its own.

"Apicha" and "Bdhak," the CD's opening tracks, illustrate the duo's intentions perfectly. They offer a music of quiet reflection and simple but affecting modulations. There is almost something pastoral about these two particular performances and, if I am not projecting too much onto it, also something very English. "Sa" offers darker colours and, at times, it is hard to avoid reference to the inescapable Dr. Phibes/Hammer Horror associations of the pipe organ. It is not so much the stuff of nightmares, more that of troubled, restless sleep.

The contrast between the different organs used here—five different Suffolk churches made their instruments available to Downes and Challenger—is also important. From the tiny, wayward, converted harmonium of St. Edmond's in Bromeswell to St. Michael's baroque behemoth in Framlingham, they each offer different textures and sculptural soundscapes. The episodes recorded at Bromeswell are easily identified from the ambient bird-song, which intrudes on both "Apicha" and "Vistri" and is retained on Vyamanikal. Again, that feeling of English pastoralism is impossible to ignore.

And there is a gentle dignity to the music, heard and felt most profoundly on "Jyotir," something of that feeling one gets uniquely from a church organ that one is being filled with sound. As it closes, other associations occur—the fairground calliope, perhaps. The record closes with "Maar-ikar" and "Nya-aya" -the first a brooding and fractious piece, the second almost unbearably sad and mournful.

I said that form emerges later. The music is improvised but the actual content of the CD was then edited and shaped in the studio. It is already taking on fresh forms for performances with other instruments and in other situations. It is music in a state of becoming and that possibility of continuing transformation is evident throughout Vyamanikal. A fine record, indeed, and one that seems beyond time itself.