Awakening Orchestra: Vol. 1: This Is Not the Answer 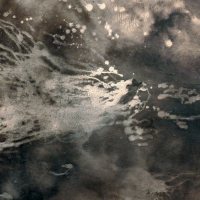 Connecticut native Kyle Saulnier is both a life-long student and a working teacher of jazz. The multi-instrumentalist and composer leads the 20-piece Awakening Orchestra's debut, This Is Not the Answer and it is as rare an achievement as Carla Bley's historic Escalator Over The Hill (ECM, 1971). The latter work—more jazz-operetta in orientation and prescribed in its thematic flow—nevertheless shares many similar elements and the Awakening Orchestra has created no less of a monumental event.

Subtitled, "Of Conflict and Resolution ," the first of two discs that comprise This Is Not the Answer gets off to a raucous start with "Prelude and Fanfare, The Prophet" with call and response quickly morphing into rising and falling gradations of chaos. "Myxomatosis, Judge, Jury and Executioner" features vocalist Nathan Hetherington interpreting lyrics that are as cryptic as the song's title. The twelve-plus minute "The Words, They Fail to Come" begins to pull the larger ensemble together. The leisurely and lyrical build up to a dramatic crescendo comes full circle as pianist Aaron Kotler and trombonist Michael Boscarino gently ease the piece to a conclusion.

Disc 2 opens with Johannes Brahms's "6 Piano Pieces, Op. 118: No. 2, Intermezzo in A Major" and it signals a shift that contrasts with much of the previous disc. Saulnier maintains the classical elements to the extent that they enable the avant-garde ensemble to improvise around the central theme rather than be overly influenced by its origins. The title track is a four-part suite and nothing short of a masterpiece. Saulnier's challenging score embraces the diverse families of instruments that make up the Awakening Orchestra. Each of the four movements has a unique personality, drama and subtle beauty that that approaches an altered musical realm without overreaching.

Saulnier delivers a uniquely artistic slant in his blending of styles and approaches, resulting in distinctive compositions and arrangements. This versatility within This Is Not the Answer is exceptional and while the individual pieces can sound episodic at first listen they later gel in a holistic way. Progressive originals share the platform with the likes of Samuel Barber; boisterous horns forcefully displace melody, as in "Protest" and Seth Fruiterman's beautiful Jeff Buckley-like vocal on "You Still Believe in Me" are facets that serve to enhance and bridge the more epic works. There are a number of outstanding solo performances throughout the collection and saxophonist Felipe Salles owns a good number of them. For all involved, This Is Not the Answer is tour-de-force and one of the best albums of the year.