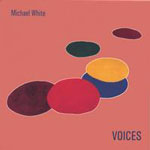 Though the violin is a relatively rare instrument in jazz, it's still a wonder that Michael White isn't better known. First coming to prominence with the early fusion group The Fourth Way—also featuring the equally underrated pianist Mike Nock—White recorded a handful of records for Impulse! in the early 1970s, including one bona fide classic, The Land of Spirit and Light (1973). Amongst a larger cast of characters, that disc featured bassist Cecil McBee and percussionist Kenneth Nash, with whom White reunites on Voices, his first disc as a leader in nearly ten years.

This is a considerably more eclectic and ambitious project than White's more intimate duet with guitarist Bill Frisell, Motion Pictures (Intuition, 1995). Alongside Nash and McBee, guitarist Timothy Young and vocalist Leisei Chen work through a program of White originals, one standard and one free improvisation that demonstrate just how malleable White's instrument of choice can be.

The violinist's tone has always been curiously fragile, bowing so lightly at times as to feel as if it's moments away from breaking apart. On the opening "Message from the Sky, White and Chen improvise freely in ways more textural than melodic. The piece is marked by overdubbed percussion and lengthy dynamic ebbs and flows, with White exploring harmonics and Chen evolving long drones. The free play continues into the beginning of "Circumambulation, but McBee, Nash and Young join in the spontaneity until Young brings focus with a softly strummed 9/8 pattern, anchoring the group while White delivers the first real theme of the set. Avoiding the confines of the traditional rhythm section, Nash moves between assorted hand percussion under McBee's full-bodied arco solo. Young, best known as Zony Mash's guitarist, is the perfect blend of folksy roots and modal exploration, working in both capacities as an accompanist and Frisell-informed soloist.

If the gentler "Circumambulation suggests roots in Coltrane's modality, then "Jeff's Place brings it into clearer focus with the more overt swing of McBee's firm walk and Nash's blend of kit and hand percussion. Other than the late Zbigniew Seifert, nobody but White has taken the lessons learned from Coltrane and moved them so organically to the violin.

But Voices doesn't restrict itself to extended modal improvisation. The bossa-inflected "Serenade finds Young on classical guitar and Nash back on hand percussion, with White doubling Chen's wordless vocals. "Mechanical Man is an altogether more jagged affair—despite solid rhythmic support, the harmonies are more skewed, the lines more angular. The one standard, "My One and Only Love, proves that White's vision is broad indeed, and that despite his more experimental aesthetic, he's got clear roots in the jazz tradition.

Ending with two diametrically-opposed tunes—the open-ended tone poem "Rose Moon and the joyfully upbeat "Fiesta Domincal —White's eclecticism does not lack focus. Voices may come from a variety of places, but at its core is White, whose own vulnerable voice remains one of the more distinctive in jazz violin.

Message From The Sky; Circumambulation; Jeff's Place; Serenade; Mechanical Man; My One and Only Love; Rose MNoon; Fiesta Dominical.