Home » Jazz Articles » Voice of the Eagle: The Enigma of Robbie Basho 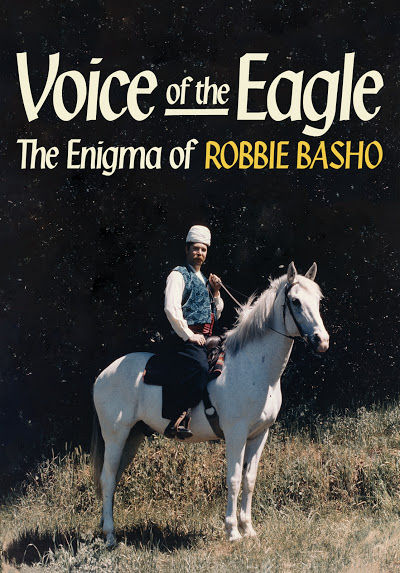 Voice of the Eagle: The Enigma of Robbie Basho
A film by Liam Barker
Liam Barker Film Production
2015/2019

Acoustic guitar music wouldn't be the same without the pioneering effort of John Fahey, but If Fahey became the face of what he dubbed American Primitive music, a genre of advanced acoustic guitar music influenced by country-blues, Robbie Basho was just as important in opening the vista of guitar playing. Whereas Fahey's hero was country-blues guitarist, Charlie Patton, Ravi Shankar's sitar showed Basho a path that was different than the blues, and throughout his life, he continued to search for beauty, taking in classical sounds as well as Persian and Native American music. He also sang with a voice as special as his guitar playing, a vocal with the range of an opera singer and the depth of a spiritual prayer.

Basho's life is examined in Liam Barker's documentary Voice of the Eagle: The Enigma of Robbie Basho. Throughout his life, he struggled with mental illness and loneliness, but he found strength in his music, and it's the music that carries the documentary. The musical trajectory is mapped out thoroughly, taking a chronological tour through a discography that includes recordings for Fahey's Takoma label, Vanguard, and the epitome of the acoustic guitar renaissance, Windham Hill. Unfortunately, all the labels Basho recorded for had one thing in common: they couldn't bring him commercial success. Instead, it is tempting to paraphrase the story about Velvet Underground that sold few records in the beginning, but those who picked up the records started a band.

The people Basho influenced included Will Ackerman whose Windham Hill label lifted himself and fellow guitarists like Michael Hedges and Alex de Grassi into the commercial stratosphere. Ackerman tried to do the same thing for Basho, but somehow fame eluded him. However, the adventure with Windham Hill eventually made it possible for a young Steffen Basho-Junghans to discover Basho through two tracks on a Windham Hill guitar sampler. Needless to say, those tracks started a lifelong passion for Basho-Junghans, as his name reveals. They are not related by blood, only kindred spirits.

Basho-Junghans and Will Ackerman both appear in the documentary along other prominent guitarists like Max Ochs, Glenn Jones and Pete Townshend. They add insightful comments to the man and the music, but a complete picture of Basho never emerges. As the subtitle suggests, the enigma is kept intact. This doesn't mean that the documentary avoids biographical substance. In fact, Barker has sought out an array of sources that include musicians, friends and musical experts, as well as family relations and people from the Sufi community that Basho belonged to.

Instead of painting a mythological picture, the documentary both brings out Basho's human frailty and his elusiveness without hiding the paradoxes of his life. It is said that Sufism was one of the things that saved him, with a complete surrender to spirituality and rules that included celibacy before marriage, and yet, one also gets a portrait of a person who more than anything needed physical closeness. In other words, Barker does not portray Basho as a Saint, nor does he dwell excessively on the circumstances of his troubled life. Instead, he lays out the facts he finds in all their tangled contradictions while keeping focus on the thing that matters most: the music. Told with poetic sensibility and adding a generous amount of Basho's own guitar and voice, the documentary is most of all a musical portrait of the artist.

A note: During the production of the documentary, Barker uncovered a wealth of previously unreleased music that will be the subject of a 5-CD boxed set titled Song of the Avatars: The Lost Master Tapes. It is scheduled for release in 2020 on Tompkins Square. The movie is also available as a special 3-disc dual format edition, including 410 minutes of extended and deleted interviews, 24-page booklet and digital downloads of three tribute concerts.