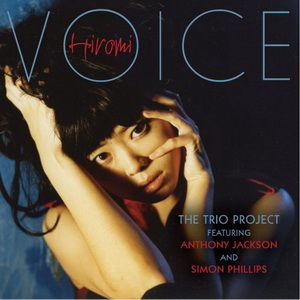 Hiromi's Voice—her seventh album for Telarc—carries the hallmarks of her previous works: prodigious piano playing, a dash of electro-funk, and strong melodic hooks, served up in a power trio setting. What has changed is the personnel, with Hiromi's rhythm section since' 04 of drummer Martin Valihora and bassist Tony Grey making way for all-rounder Simon Phillips on drums and the innovative Anthony Jackson, on contrabass guitar. Phillips, who impressed most recently on the Trilok Gurtu/NDR Big Band recording 21 Spices (Art of Groove/Indigo, 2011) fits the mold of dynamic, category-defying drummer favored by Hiromi, and brings plenty of bustling energy and momentum to the music, not to mention versatility, and a deft touch when required.

Jackson is no stranger to Hiromi, having guested on her first two albums. As is his wont, Jackson eschews any spotlight-grabbing solos, though his trademark melodic comping displays the ingenuity of continuous improvisation. It's Hiromi's virtuosity that impresses with her Lennie Tristano-like dazzling speed and innate musicality.

The classically hued intro to the title track is a seductive diversion to the main business, an energetic number which features some closely knit, high-speed unison lines from all three musicians and spectacular solos from pianist and drummer over a bass ostinato. Hiromi is also adept at the odd curve ball, as on "Flashback" where the full flow of the trio spins on a dime and emerges in a swinging blues. There is much athleticism from the leader, and Phillips, swept up in the energy, unleashes an extended solo of thunderous, tumbling rolls. Phillips has played with everyone from guitarist/composer Mike Oldfield to The Who, but it's difficult to recall a more animated performance than that given on Voice.

The funky "Now or Never" sounds like Dr. John meets Herbie Hancock with its soulful New Orleans gait and squishy electronic keyboards, though this is a primarily an acoustic piano hoedown. Grooving synthesizer also colors "Desire," though an extended piano solo from Hiromi steals the day. While electronic keyboards, electric bass and electric guitar have colored nearly all Hiromi's albums, she is an acoustic pianist of considerable refinement, as the graceful solo piece "Haze" demonstrates with its lovely, classical fluidity.

In fact, Hiromi shows perhaps a greater passion for classical music than for electronic play; previously the pianist has interpreted the music of Debussy and Pachelbel and, here, she adds a gently bluesy take on Beethoven's Piano Sonata No. 8, "Pathetique." There's always a hint of a smile in Hiromi's blues, and Jackson's bass and Phillips on brushes contribute a strolling swing, with a washing cymbal providing the perfect closing note.

Voice presents Hiromi as a maturing composer spreading her wings, confident and open to all manner of influences. This is a highly satisfying addition to Hiromi's discography, and one that leaves the tantalizing sensation that her already fascinating musical journey is maybe only just beginning.