BY BUDD KOPMAN
November 7, 2006
Sign in to view read count 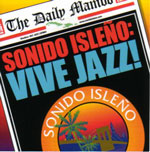 Vive Jazz is a prime example of what "Latin jazz" really means. Benjamin Lapidus, who leads the longstanding group Sonido Isleño, says, "I look for ways to put jazz into Latin music rather than making Latin music subordinate to jazz, which is the classic notion of Latin Jazz. I try to present musical situations that can bring folklore and jazz together in a straightforward fashion, so that the listener doesn't lose the harmonic complexity of jazz."

Lapidus, born to first-generation American Jewish Brooklynites, has spent much of his adult life studying Latin, particularly Cuban, jazz first-hand both in Cuba and on the streets of the Latin neighborhoods of New York City. He earned degrees from the Oberlin Conservatory and won a grant to study with Steve Lacy in Paris; he's played with people like Joe McPhee, as well as virtually everyone in the Latin jazz community.

Sonido Isleño was primarily a string and percussion band until Lapidus expanded it for this recording with saxophone, trumpet and other instruments to deepen the jazz feel. Speaking as one who's not particularly enthralled with the repetitive and simplistic aspects of much of Latin jazz, Vive Jazz was a breath of fresh air and an intense trip to many musical worlds.

Lapidus the guitarist can hang with anyone, and during his solos on this instrument, the jazz component takes over. However, he is also an acknowledged virtuoso on the Cuban tres, a guitar-like instrument with three sets of double strings—and when he plays this, as on as in "East of el Son, Wes del Tres," he really merges the two musical worlds, sounding authentic while at the same time moving the tres beyond its folk limits and into the jazz world.

The title tune, by far the longest track, is named after a poem that a fourteen-year-old boy, Manuel Antonio Duenas Peluffo, wrote after hearing Sonido Isleño play in 2004. It is the perfect example of what Lapidus is trying to do, as it changes rhythms between pure jazz and Latin. "Ornetteando" is dedicated to Ornette Coleman and features the most wonderful juxtaposition of Coleman-esque out-there playing against Latin rhythms, only to be answered by tres and tenor in the Latin style.

"Taino" starts out with a straight and very cool jazz guitar intro that Lapidus says started as an "etude for a familiar jazz harmonic sequence," only to be met by a subtle rumba rhythm, and it takes off from there, as it offered him "a chance to play the changes in a new rhythmic context."

Saying this music is full of energy is an understatement, but there is much more here than the typical blaring horns and ringing cowbell; Vive Jazz really is an authentic effort to merge two musical worlds. Marvelous.

Visit Sonido Isleño on the web.