Home » Jazz Articles » So Percussion: Amid the Noise

So Percussion: Amid the Noise

By John Kelman
November 7, 2006
Sign in to view read count 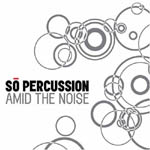 The mere mention of an all-percussion ensemble can sometimes scare off listeners who prefer more conventional settings, but it's important to remember that the percussion family also includes tuned instruments like the vibes, marimba... even piano.

Emerging as interpreters of contemporary new music composers like Steve Reich, David Lang and Evan Ziporyn, the twenty-something members of So Percussion operate according to a basic assumption: while rhythm is a key element of any percussion ensemble, so too can be melody and harmony. Amid the Noise is the group's first disc to feature all-original music, and as such it's a bold new step, but the group has been turning preconceptions about percussion ensembles on their side since it was formed earlier this decade.

Jason Treuting's twelve-part continuous suite deftly blends the minimalist bent of Steve Reich with the sparer ambient landscapes of Brian Eno. It's a hypnotic blend that revolves around pulses ranging from direct to barely perceptible. Melodic ideas unfold so gradually—often based on repetition, but building on that repetition just as imperceptibly—so that their full impact can only be fully appreciated when taken as a whole. It's a remarkably beautiful and atmospheric work for an ensemble based around instruments that are, almost by definition, more visceral than ethereal.

In addition to using conventional instruments like the Fender Rhodes, glockenspiel and drums, the members of So Percussion also extract sounds from unforeseen sources. Metal pipes are cut to resonate specific notes; an ethernet port becomes an unexpected source of sound. Wood planks and assorted metals are used for preparation techniques like affixing tin foil to the vibes to create a "fuzzier" sound. The group is augmented with electric and resonator guitar, and there's some programmed sound involved, but what's most noticeable about Amid the Noise is that, while its soothing and often bell-like timbres approach the familiar, there's something uncommon about its overall texture.

Even more revealing is the accompanying DVD, where urban scenes filmed by Treuting's sister Jenise become the visual inspiration for music that feels anything but urban. There's an almost Zen-like awareness of in-the-moment beauty in the most unexpected of places that makes Amid the Noise a soundtrack for imagery very different than one would imagine.

Amid the Noise is proof that transcendence can sometimes be found in the most pedestrian of places. So Percussion continues to source material from other composers, but this new-found compositional self-reliance has allowed the group to reposition itself as a creator of new music that—like Cantaloupe labelmates Bang on a Can, Ethel and Alarm Will Sound—stretches the boundaries of contemporary classical music.