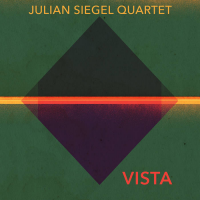 Julian Siegel is an in-demand and award-winning British saxophonist who teaches saxophone in the jazz department of London's Royal Academy of Music. This is his Quartet's follow-up to their London Jazz award-winning album Urban Theme Park (Basho Records). Although Siegel is no stranger to Whirlwind Recordings in his role as a member of Partisans who released Swamp on the label in 2014, this is his first album for Whirlwind as leader.

"The Opener" with its memorable head achieves that all-too-rare combination of angularity with warmth (a pleasing tendency that's continued throughout the recording) and the seductive mood continues with "I Want To Go To Brazil" which whilst not a samba still elicits some Latin leanings if only in its subliminal nod to the great fellow tenorist Stan Getz. "Song" an elegant ballad with some deeply resonant double bass from Oli Hayhurst, is followed by the quirkier "Pastorale" with Siegel now on soprano vying for attention with Liam Noble's sprightly piano runs.

As its name suggests, the Bud Powell tune "Un Poco Loco" is indeed a little crazy, benefitting from a multiplicity of interwoven rapid-fire themes but it gels together splendidly, with tenor and piano constantly exchanging fleeting lines. An ascending and descending vamp represents the overarching characteristic of "Vista" along with a keen rhythmic vibrancy. "Idea" sees Sigel on bass clarinet, a woefully underused and therefore always welcome instrument to hear anytime. Inevitably its use draws comparison with arch practitioner of the bass clarinet John Surman, but Siegel has his own distinct voice and manages to keep what is sometimes regarded as a lugubrious instrument, light and airy. This album perfectly demonstrates how a quartet of seasoned musicians can successfully and seemingly effortlessly, produce an album of fresh ideas and catchy themes.