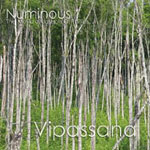 Composer-conductor Joseph C. Phillips, Jr. has a way of making his ensemble, Numinous, sound even larger than its 25 pieces. Of the three wind players, Ed Xiques plays five different instruments, Dan Willis handles six, Ben Kono a grand total of eight. As a result, Vipassana, Phillips' sophomore recording, abounds with nearly every sort of flute, clarinet and saxophone sonority, not to mention oboe and English horn. The rest of the band is a veritable Noah's Ark: two brass players (trumpet and trombone), two vibists, two guitarists, two pianists, two percussionists and five vocalists, as well as doubled violins, violas and cellos. Far from getting lost in this aural sea, Thomson Kneeland, the lone bassist, anchors the music with solid, resounding notes.

Inspired by Buddhist spirituality, Vipassana is in some sense a post-minimalist classical work that refers explicitly to the sound world of Steve Reich. The vibraphone motifs and staccato vocal snippets of the third movement, "Into all the Valleys Evening Journeys," come so close to Reich's Music for 18 Musicians (ECM, 1978) that it's almost startling. Phillips, in his liner notes, owns up to the Reich influence and explains how Mahler and Björk also rear their heads during the final and longest movement, "The Nothingness That Is the Source of Everything." Pivoting naturally from Reich-ian repetition to modern straight-eighth time feels, Phillips also taps into the jazz continuum, setting up spirited solos by Kono, Willis, guitarist Amanda Monaco, vibraphonist Tom Beckham, pianist Deanna Witkowski, trumpeter Dave Smith and violinist Skye Steele.

In Phillips' writing one can sense the impact of Maria Schneider's large-band innovations, her expansive tonal vocabulary most of all. And given that Pat Metheny is a fellow Steve Reich devotee, it's fitting that Vipassana can call to mind the Pat Metheny in one of its darker, more abstract moods. But Phillips arrives at an imaginative gestalt of his own, transforming poetry by Denise Levertov into melodically poignant lyrics, sung first by Julie Hardy and later by all the vocalists together. "God's flight circles us," they repeat, as Vipassana fades away in a rain of jangling percussion.

Of Climbing Heaven and Gazing on the Earth; Stillness Flows Ever Changing; Into all the Valleys Evening Journeys; The Nothingness that is the Source of Everything.