By RICK BRUNER
February 1, 1998
Sign in to view read count 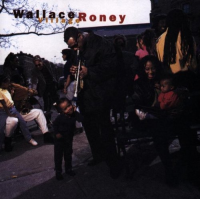 There are many rewards awaiting listeners in the latest offering from trumpeter Wallace Roney. There’s the controlled fire of Mr. Roney’s trumpet lines, the equally hot playing of wife, Geri Allen, on piano and brother, Antoine Roney, on tenor saxophone, and the rare treat of hearing Lenny White’s amazing drum work. Add inspired guest spots from Chick Corea, Pharoah Sanders, and Michael Brecker and it adds up to one exciting package.

The first four tunes feature Chick Corea on piano. His "Affinity" begins the disc on a contemplative note. "Inner Urge" features Michael Brecker and Antoine Roney in an all-out tenor sax firestorm. Cole Porter’s "I Love You" is given a swinging, yet open interpretation that invokes the passion and joy of discovery that typifies the best musical performances. Pharoah Sanders wails on "The Pharoah" and "EBO". Antoine Roney contributes some wonderfully angular tenor work throughout, especially on his "Aknaaba." From "Aknaaba" on, the disc addresses African rhythms and melodies and brings forth some additional colors with the tasteful use of Fender Rhodes and keyboards. For those of you with an aversion to electronics, never fear! They are subtle and effective. No less than you’d expect in the hands of this great band.

One of the more exciting releases of 1997, Village is a keeper.