BY IAN PATTERSON
December 11, 2018
Sign in to view read count 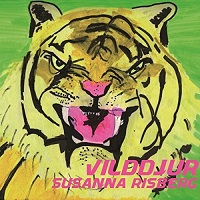 If the proverbial ten thousand hours of practise does lead to mastery of one's craft, then it's a safe bet that twenty-six-year-old Swedish guitarist Susanna Risberg has long since passed that milestone since taking up the guitar aged ten. Nor is it just her virtuosity that compels on Vilddjur, her third album as leader, but her emotional shading and the compositional sophistication at play too. These nine refined yet visceral tunes also suggest that Risberg's musical vision is broader than the trio—and occasionally quartet—format with which she has toured extensively around the world.

From the elegant understatement of the opener "Leo," Risberg demonstrates a heightened melodic and harmonic sensibility. Her soloing is fluid, yet unhurried, and arresting in its mazy unpredictability. Pianist Oskar Lindström and drummer Rasmus Svensson-Blixt both stretch out, the latter over a joint guitar/piano vamp, while bassist Arvid Jullander plots a steady rhythmic compass. Svensson comes into his own with an extended solo spot on the more contemporary "Jubal's Jug," though bass duties shared fairly equally across the nine tracks with Palle Sollinger and Niklas Fernqvist. Given the varying personnel it's easier to discern Risberg's compositional style than a group sound per se.

Risberg exhibits compositional flare on "Lotass," employing three saxophones, trumpet and trombone to great effect on a slow-snaking blues that echoes Kenny Garrett-era Miles Davis. The guitarist's caressing touch on another laid-back blues tune, Billy Strayhorn's "Lotus Blossom," evokes Jim Hall for lyrical finesse. The other non-original is an unaccompanied interpretation of Dimitri Shostakovich's 1944 "Piano Trio No.2 in E Minor"; this beguiling vignette showcases both Risberg's advanced harmonic reach and—characteristic of her playing in general—the emotional heft in her delivery.

There is, however, plenty to admire the collective proposition. "Hasse & Gnutta" and "Kirika," both essentially guitar vehicles, are notable for Risberg's seemingly tireless melodic invention, while "Jubal's jug," colored by Lindström's subtle electric keys, invites an extended, unaccompanied bass solo of note. On the guitar/piano duet "Hast(era)," Risberg and Lindström dovetail in gentle symbiosis, where chemistry rather than chops are to the fore. Risberg drives a dynamic trio dialog on the slow-burning title track, her shimmering harmonics and bent notes gathering momentum with compelling disregard for conventions. Fans of Bill Frisell at his most provocative will be drawn to Risberg's playing here.

The continually arresting playing on Vilddjur makes the case for Risberg as an original voice. Technically impressive and emotionally persuasive, Risberg is above all an exciting guitarist who dares to plot her own course. With Viddjur, Risberg is truly worthy of inclusion in any discussion about important contemporary jazz guitarists.