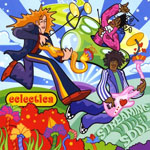 After years building an audience one town at a time, banjoist Béla Fleck and the Flecktones no longer needs to record and tour incessantly, allowing its members to pursue other avenues. With Fleck off pursuing his Throw Down Your Heart, Tales from the Acoustic Planet, Vol. 3: Africa Sessions (Rounder, 2009), bassist Victor Wooten collaborating with fellow icons Stanley Clarke and Marcus Miller as S.M.V and woodwind multi-instrumentalist Jeff Coffin helping out the Dave Matthews Band on Big Whiskey and the GrooGrux King (RCA, 2009), following the untimely passing of LeRoi Moore, what of percussionist Roy Wooten, better-known as the flamboyantly dressed and Synthaxe Drumitar-laden Futureman?

He's been busy with Eclectica, a trio that will appeal to the jamband contingent that's made the Flecktones so popular, but also to confirmed jazzers who don't mind a little hippy-ness with their swing and a little funk on the side. Streaming Video Soul's six original tunes—fashioned out of two lengthy jam sessions—will be no surprise to followers of Flecktones recordings like Little Worlds (Columbia, 2003) and The Hidden Land (Columbia, 2006), where Futureman has incorporated acoustic percussion and vocals. Alongside electric 6-string violinist Tracy Silverman—a longtime Windham Hill label staple, but here proving himself a more energetic and virtuosic player—and bassist Kyle Whalum—son of smooth jazz icon Kirk Whalum, but here completely distanced from the genre—Futureman and Eclectica are a less-considered alternative to the sometimes too-complex-for-its-own-good Flecktones.

In addition to massive virtuosity and knotty writing that still manages to groove multifariously, The Flecktones has always been about peace and love. The psychedelic cover to Streaming Video Soul makes clear that Eclectica possesses a similar penchant for the 1960s, when extended jamming was what groups did, rather than having its own genre definition. It was also a time when groups dismissed musical boundaries—where The Byrds were listening to John Coltrane as much as they were Bob Dylan, and Miles Davis was looking to James Brown and Jimi Hendrix for inspiration. Silverman, Whalum, and Futureman—here strictly on acoustic percussion—make music filled with jazz markers, but equally with more direct grooves than the Flecktones. Irregular meters may be in plain site on tracks like "If You Could Smile Forever," which features Coffin as a guest, but they don't shift every bar, one definer in the more challenging Flecktones repertoire.

Virtuosity may be in clear view, but it's never in excess or there for its own sake. On the vamp that takes the funky title track out, Whalum's combination of in-the-pocket grooves and context-driven fills are just as impressive as Silverman's lyrical work on the gentler "Peace and Quiet." Equally compelling are Futureman's propulsive but light rhythms, played almost entirely on brushes, opening the uplifting "Nawlins (Stand Together)" with an energetic, second-line based solo.

It's a remarkable blend of potent jamming, catchy songwriting, and an unexpectedly light vibe that makes Streaming Video Soul not just one of the year's most pleasant surprises, but one of the best side projects to ever come out of a Flecktone.

Streaming Video Soul; Sister Swag (Too Far to Follow); Peace and Quiet; Nawlins (Stand Together); Bi-Polar Disorder; If You Could Smile Forever.