By IAN PATTERSON
December 29, 2016
Sign in to view read count 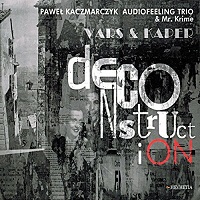 Doubtless some were surprised when pianist/composer Pawel Kaczmarczyk left ACT Records after the ambitious Complexity in Simplicity (2009). However, the decision has perhaps proven to be a musically astute one, given the stunning statement from Kaczmarczyk's Audiofeeling Trio—featuring one of Poland's top rhythm sections in Maciej Adamczak and Dawid Fortuna—that was Something Personal (Hevhetia, 2015). Here, the same line-up is augmented by Mr. Krime (Wojceich Dlugosz) on turntables and electronics in a powerful reimagining of Bronislaw Kaper and Henryk Vars' songs.

Two of Poland's most famous film composers of the twentieth century, Kaper and Vars—like Krzysztof Komeda a little later—influenced several generations of Polish jazz musicians. Kaczmarczyk and co mine the lyrical core of well-known Kaper and Vars songs while injecting rhythmic dynamics of a contemporary jazz hue.

The subtle but effective scratching and electronic footprint of Mr Krime augments the sonic tapestry in empathetic fashion, while the sampling of old Polish films/radio and the crackle of vinyl creates a bridge to the past. Yet Deconstruction is neither a nostalgic exercise nor a fusing of disparate genres. In Kaczmarczyk's sound-world, old film scores, modern jazz and turntables are part of a continuum—diverse vocabulary in the same idiom.

There's perhaps less of Kaczmarczyk's tremendous virtuosity throughout than on previous recordings. Instead, the pianist builds in stages, his expansive lyrical plateaus giving way to pockets of greater or lesser collective intensity, or else inviting intimacy from the bass; so it goes on Kaper's "Invitation"—with its dramatic finale—and on Vars' gorgeous "Along the Milky Way," where Adamczak's quietly commanding solo is put in relief by the dynamism either side of it.

Striking bass ostinatos are a recurring feature of Kaczmarczyk's arrangements, as are piano vamps as a springboard for Fortuna's riveting solo features. Whilst these trademarks render the material a little samey at times, more subtle touches keep the music continually evolving. Kaczmarczyk's pounding left-hand rhythms provide striking counterpoint to his dazzling right-hand runs on Kaper's "While My Lady Sleeps." Then, left hand drops out altogether, as the ensemble seamlessly shifts its weight, the intensity fading as Adamczak nevertheless maintains the tempo with a ripping solo.

Film soundtrack out-take on the intro to "You Won't Forget Me Now" and Mr Krime's turntable grooves towards the end—whipping the music into stormy climax—provide contrast and counterpoint to the elegant trio dialogue in between. On a lovely arrangement of Kaper's "All God's Chillun Got Rhythm," Mr Krime's electronics conjure trumpet textures, urbane counterpoint to Kaczmarczyk's sweeping romanticism. A most versatile musician, Kaczmarczyk seduces with the most delicate touch on the ruminative intro to Kaper's "Follow Me"—with Fortuna's cymbals hissing like lapping waves—before unleashing a thunderous riff that spurs the drummer to heady exhibition.

Elsewhere, Adamczak's dreamy arco solo on a gently beguiling version of Vars' "Oh Sleep, My Love," the alternating staccato rhythms and melodicism of "Mr John," and the refined lyricism and intuitive trio interplay of "Ninon" all provide contrasting textures and moods. The band revisits the head of "While My Lady Sleeps" in a coda that unleashes Fortuna over a signature Kaczmarczyk vamp to thrilling effect.

Stylish, imaginative, and stimulating, the brilliant Kaczmarczyk Audiofeeling Trio hits the mark with this captivating homage to past and present.