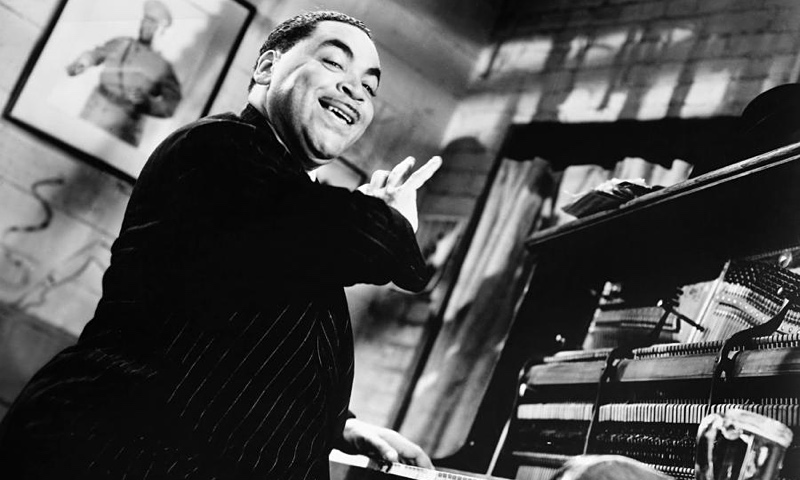 BY TISH ONEY
December 28, 2016
Sign in to view read count
Legendary pianist and songwriter, Thomas Wright Fats Waller (1904-1943), contributed several outstanding gems to what we consider today to be the Great American Songbook. These standards include "Honeysuckle Rose" and "Ain't Misbehavin'" (both from 1929), among others. Waller's all-too-brief career reflected the impressive output of a first-rate musician, and showed him to be a talented radio personality, prolific recording artist, and beloved performer both on live stages and in film. Well-versed in the stride piano style, thanks to his early introduction to James P. Johnson, Waller proved to have formidable talent for the instrument, confident technique, and an impeccable ear, as evidenced by his historic recording of the inimitable piano challenge, "Handful of Keys." A successful songwriting team, Waller and Razaf ably created clever, catchy music that was instantly relatable to the casual listener. These traits were never better expressed than in their 1984 Grammy-Hall-of-Fame-honored song, "Ain't Misbehavin.'"

The song displays a typical AABA form over 32 bars, characterized by an opening eight-bar theme (A) that repeats before a contrasting eight-bar theme (B) is presented as a bridge. The song finishes with another statement of the A theme, keeping to traditional form. Razaf constructs the lyric phrases in two-bar groups for A, rhyming the ends of each group together in measures 1-4 ("myself" with "shelf"), then abandoning the rhyme scheme to state the song title in m. 5, which does not rhyme with its phrase counterpart anywhere through the rest of the phrase. This is often the case in jazz standards when the song title is stated in the text, in order to set the title apart from rhyming lyrics. In this way, the rhymes support and give evidence to the main point or message of the lyric, which is the title of the song. Razaf adopts this same scheme for each iteration of the A theme. When he comes to the B theme, his now one-bar phrase structure and rhyme scheme to match ("Horner/corner" and "nowhere/care") adopt a repetitive pattern to mirror the repetition of melodic material, which is also now a one-bar motive. In the exact manner he already used in the final four bars of each A, the final four bars of B (mm. 13-16) do not rhyme whatsoever, giving the listener a refreshing break from and preparing him/her for more clever rhymes.

A master of melodic interest, Waller designs a melody that bounces and swings with help from the first syncopated eighth rest starting each new section. His choice of placing the tonic pitch on the offbeat followed by the supertonic (second scale degree) on beat two, then back to the tonic, in a swinging eighth note pattern, serves to de-emphasize the tonic pitch, as is apropos in the swing style, while accenting the ninth (a/k/a scale degree two). Established jazz players do this naturally in their improvisations to accentuate non-tonic chord tones and extensions that provide more color against the bass line, so it is not uncommon to see this principle applied by great jazz composers in the melodies they write. Playing with rhythm, Waller then takes the "tonic-ninth-tonic" motivic segment he established in bar one and presents it up a step, and a half beat earlier in its second iteration. Thus he has already created musical unity and freshness by only bar two. The first three notes of the melodic motive are initially followed by a leap of a fifth. Those intervals are maintained in bar two (as a real sequence stated up a whole step), but by the third iteration of the motive in bar three, the original syncopation returns with the motive starting on the fifth scale degree and leaping a fourth above to reach the tonic before reaching higher to the ninth to begin a descending arpeggio outlining a one (tonic), six-nine chord. The melody from mm. 1-2 returns again at m. 5-6, and with a bit of rhythmic finesse, Waller keeps stating that motive in slightly different ways to bring the listener around to a two-bar repose on the third scale degree to finish the first A theme. The second statement of A is presented identically to the first, except that the second A comes to rest on the tonic for its last two measures.

The B theme begins with a different, but equally simple four-note motive with a reversal of contour. The first three statements of this motive are identical and fill three measures (because he now uses one-bar phrases). The fourth statement (in m. 12) modifies the motive by augmenting the interval by a semitone—the high note of the motive is here raised to create a major third following the three previous minor thirds. At m. 13 the melody changes, repeating the ninth scale degree (functioning as the fifth degree of the new scale built on V) in quarter notes to start a stepwise descent to V7, then down to the third and second scale degrees, temporarily abandoning motivic repetition for four measures as well as the previous rhythmic syncopation and complexity. Here Waller leaves room and attention for the lyric which finally justifies all the singer's self-proclaimed good behavior: "your kisses are worth waiting for, believe me..." The location of this lyrical phrase—the second half of the bridge—is well-worth noting. This is precisely the locus of many standards' "main thrust." Here the lyricist and the composer often create a collaborative effort that emphasizes the lyric in order to ensure that the point is not lost among cutesy rhymes.

Harmonically speaking, the song is straightforward and simple, yet very cleverly designed. It adopts a rather common bass line in mm. 1-2 (I-V7/ii-ii-V7) followed by a slightly meandering bass line in mm. 3-4 (possibly suggesting that the singer claims to be more virtuous than he actually is!) as he explores I-V7(#5)/vi-IV-iv before returning to the original harmonic progression and the classic turnaround—a string of dominant chords or circle of fifths: III7-VI7-II7-V7 (to reflect the bass line) or, put a more theoretically and functionally accurate way, V7/vi-V7/ii-V7/V-V7. The harmony of the second A statement begins in the same way, and ends with a firm landing within the tonic key at m. 7-8, finishing A by skipping away from tonic to V7/vi to begin the bridge in the relative minor (vi) tonal center.

At the bridge, Waller shows a wonderful strategy for creating harmonic contrast by employing harmonic rhythm augmentation. Previously, the harmonic rhythm pattern occurred at the level of the half note (every two beats a new chord was played). In the bridge (m. 17), the harmonic rhythm occurs at the level of the whole note while the melody simultaneously becomes more repetitive and busy. Just as in the laws of physics, music occupies a certain amount of space, and when one element of it is reorganized, other elements must adjust accordingly. By decreasing the harmonic activity in the bridge, Waller leaves plenty of room for an increase in melodic activity, thus adjusting the balance of the music to ebb and flow in accordance with the textual expression (which also increases in intensity during B to bring the main point home). By m. 21, the harmonic rhythm returns to the half-note level and the dominant (V) has temporarily become tonicized, leading very naturally back to the original tonic (I) to finish out the last A theme statement.

"Ain't Misbehavin'" turned out to be an interesting study of masterfully timed text, motivic usage, and harmonic balancing of melodic activity. Textually, Andy Razaf and Fats Waller created an ideal balance between repetitive, busy descriptions of a dateless social life in the A themes, and a lovely, simple main point in the bridge. This main point is clearly stated via a long, arching melody which does not have to compete with the busy repetitions of the many motivic permutations within A, resulting in a lovely balancing act so charmingly delivered by this gifted songwriting team. Knowing when to use repetition and why are concepts not lost on this duo. The understanding of various shades of balance—in this case, harmonic/melodic, and motivic/textual—seems to be a recurring theme when studying the construction of enduring standards. Studying the ebbs and flows, highs and lows, and all sorts of paired parameters often reveal the necessary ingredients of a work that may eventually earn the prized status of Great American Songbook Standard.