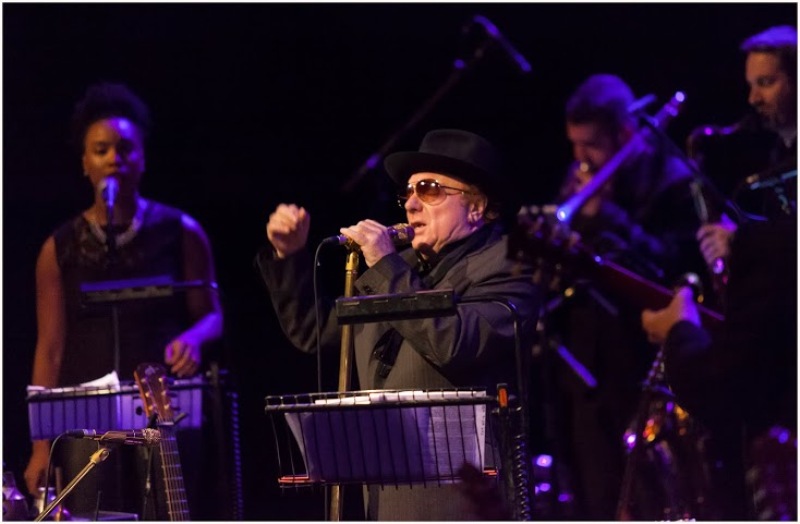 Who would have thought that Van Morrison commands a following as loyal and dedicated as fans of the Grateful Dead? The tickets for the singer's concert in Limerick had sold out in an hour and a half, which must have been particularly satisfying for the organizers of the third Limerick Jazz Festival, but more remarkable were the pilgrimages people had made to catch the Celtic soul man.

Fans had journeyed from America, England, Sweden and Switzerland. Many more made the trip down from the singer's home town of Belfast. This wasn't a special Van Morrison gig either, though many in the concert hall of the University of Limerick would argue—and did—that they're all special. Many of these folk habitually travel to see Van Morrison, wherever and whenever they can. One woman claimed she had seen him perform thirty times in the past three years.

Having ignored his home country for long stretches at a time—his 2012 Belfast gig was the first in his home town in a decade—it seems as though Van Morrison wouldn't play anywhere else these days. In the last couple of years there have been high- profile gigs at Dunluce Castle on the North Antrim Coast and unlikely low-key gigs in the old Strand movie theatre, the Harp Bar in Belfast on New Year's Eve and three emotional concerts in his former school of Orangefield High, prior to the school's closure. Van The Man hasn't played this frequently in Ireland since he first started out with the garage rock 'n' blues band Them, fifty years ago.

"Van's fallen in love with the ol' place again," said a man from Belfast, who had been at the Orangefield gigs. It's a romantic notion but a more likely scenario is that at sixty nine, Van Morrison is simply feeling less inclined to do the long tours. After half a century, who could blame him?

As is customary, Van Morrison followed his band on stage to rapturous applause, picked up his alto saxophone and launched into the breezy, horn-rich "Celtic Swing." Brevity characterized the songs, with solos so short that it seemed as if the seven- piece band was chucking a hot potato around. The sunny "You Make me Feel So Free" set the tone for the evening and it was striking during the ninety-minute set how much of Van Morrison's output since the 1990s has followed the blueprint of the cheerily optimistic Into The Mystic (Warner Bros, 1979), with its mixture of New Orleans R&B, Philadelphia soul and radio-friendly pop beats.

"Lost John," a traditional folk song about a chain-gang escapee paid tribute to singer Lonnie Donegan, with whom Van Morrison recorded the track on The Skiffle Sessions—Live in Belfast 1998 (Point Blank, 2000), though this version kicked like Louis Jordan's early rock 'n' roll. The tempo slowed with the romantic ballad "Someone like You" and picked up again with "Only A Dream." The poetic "Queen of the Slipstream" rounded out a triptych of love songs as only Van Morrison can pen them.

Guitarist Dave Keary got one of the loudest cheers of the evening for the familiar riff of the blues classic "Baby Please Don't Go"; though most associated with Big Joe Williams, Van Morrison stuck close to the John Lee Hooker- inspired version that had earned the Belfast singer a Top 10 hit with Them; switching between vocals and short blasts of harmonica, Van Morrison led the band through a verse or two of "Parchman's Farm" and "Don't Start Crying Now," also from the Them days.

The blues featured fairly heavily, with Sonny Boy Williamson II's "Help Me" and another Hooker tune, "Think Twice before You Go" spicing up a twenty-song set, with Van Morrison's wailing harmonica and Keary's biting guitar both central.

Classics of a more recent vintage stirred the crowd, with a jazzy version of "Moondance," "Days like This" and "Whenever God Shines His Light" -a concession to the hit seekers. The infectious, ska-flavored "Precious Time"—a staple of Van Morrison's concerts for many years—would doubtless have had a non-seated audience boogieing, as would the swinging "The New Symphony Syd," another grooving tune that suggested Louis Jordan's influence.

The crowd came to life on the clap-along "Glad Tidings" from the classic Moondance (Warner Bros, 1970) album, though unsportingly opted out of the "la la la la" sing-along sections. "Joyous Sound" lifted the spirits further still, paving the way for the inevitable, set-closing "Brown Eyed Girl." The 1967 tune was honored for obtaining 10 million air-plays on US radio as of 2011. It feels as though it's had a similar number of plays just in Northern Ireland and it's probably due a well-earned rest. That said, it had the Limerick Jazz Festival on its feet and it remained that way to applaud Van Morrison off the stage as the band conjured a New Orleans party atmosphere.

Van Morrison might not have quite the swagger of old, nor improvise vocally to the same degree but his voice remains uniquely distinctive and finely tuned. He still doesn't introduce his band and he doesn't do encores. He does, however, give the crowd plenty of what it loves and has come to expect from this tireless troubadour. Some things never change.