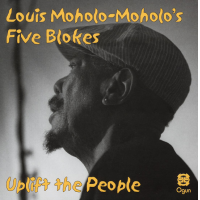 At last an album which captures some of the intense excitement, wayward adventure and sheer joy of a group which has wowed audiences at festivals and clubs across Europe and North America. Uplift The People by South African drummer Louis Moholo-Moholo's prosaically-named Five Blokes was recorded live at London's Cafe Oto in April 2017 and represents an upgrade on Four Blokes (Ogun, 2014) in every sense. The blokes in question include long time collaborators Jason Yarde on saxophones, John Edwards on bass, and Alexander Hawkins on piano, with the addition of saxophonist Shabaka Hutchings responsible for the numerical inflation.

Hutchings, a rising star in the British firmament, has not only his own South African connections, manifest through his group Shabaka & The Ancestors, but has also appeared in several Hawkins' line-ups over the years, while Hawkins himself, alongside Edwards, is a stalwart of Ethiopian jazz pioneer Mulatu Astatke's band. Taken together what this tangled web of associations and influence means is that this a unit absolutely primed to interpret Moholo-Moholo's extensive repertoire and has quickly become one of the most fertile outlets in the 78-year old drummer's long career.

In the liners Yarde highlights the paradox of a free jazz outfit playing tunes, but that's exactly what it is. And what tunes! Gorgeous melodies like the achingly beautiful "Dikeledi Tsa Phelo" and the haunting "B My Dear" seemingly emerge unheralded from a swirl of fast changing kaleidoscopic exchange. But in fact close listening reveals Moholo-Moholo's prompting drum patterns, cues and verbal encouragements picked up sometimes instantaneously, other times more willfully piecemeal, by the band. Indeed how they embrace the apparent disorder is part of the charm, like when imitations of Moholo-Moholo's "Yes Baby" and "No Baby" vocal exhortations ring round the bandstand, or when everyone sings along on "Zanele" to engender a warm fuzzy glow.

In fact the 11 songs often function as way stations on a continuous journey, in that they are not necessarily developed and frequently serve to promote ensemble interplay rather than act as individual features. Solos when they arrive, like Hutchings' overblown honks on "Do It" and Hawkins' Morse code hammerings on "For The Blue Notes," are usually brief and occur against the backdrop of the tune in play. All that's testament to a remarkable degree of self effacement, none more so than Moholo-Moholo himself who never explicitly solos, though his subtle pattering shuffles, insistent cadences and dancing cymbal shimmer might be perceived best as a single glorious outpouring.