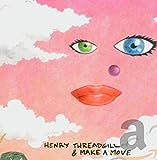 This Chicago, IL born modernist worked his way through the ranks of the AACM (Association for the Advancement of Creative Musicians), while eventually forming the highly regarded trio Air, back in the early 70's. Nevertheless, saxophonist/composer Henry Threadgill's prominence sharply increased with the advent of his acoustic/electric Very Very Circus and Make A Move bands. Consequently, the artist burst onto the scene with a highly distinctive compositional style, where he seemingly derived inspiration from Sousa style marches, cabaret, rock, and jazz. Several years ago, this writer read an article which cited Threadgill's fascination with architecture: a notion that seemingly serves as a motivating factor for some of his musical applications. So, with his first recordings in five years, Threadgill's latest concurrent releases are divided into two separate performing factions: the acoustic based sextet ZOOID and the 2/5ths electric outfit Make A Move.

Up Popped The Two Lips represents Threadgill's ZOOID aggregation as the saxophonist's hybrid - strings, woodwinds, tuba ensemble, and oud (performed by Tarik Benbrahim) - features some of the paradigms witnessed on several of his 80's and early 90's recordings. Here, tubaist Jose Davila firms down the bottom end via pumping lower register tones and resonant choruses. On the opener, "Tickled Pink," Threadgill's somewhat whimsical and at times probing flute lines ride atop a loping, odd-metered pulse. Acoustic guitarist Liberty Ellman provides a bit of discordant contrast with nimbly plucked notes as the band injects a quasi parade type motif amid linear developments. Otherwise, Threadgill's raspy toned and often vertically inclined alto sax work is prominently exhibited on this effort, while his compositions move about in geometrically opposed sequences. Moreover, the quintet pursues dirge like progressions and densely complex patterns on the piece titled "Did You See That." Besides, it is a joy to delve into the band's multidirectional evolutionary processes.

Henry Threadgill's importance to modern jazz cannot be denied, as there are few composers who possess such a distinguishable methodology to music in general. The artist along with a select few is inadvertently signaling in a new golden age of jazz-based fundamentals and thought processes, as this unfolding saga continually ascends to loftier heights.

Up Popped The Two Lips - Track listing: 1.Tickled Pink 2.Dark Black 3.Look 4.Around My Goose 5.Calm Down 6.Did You See That 7.Do The Needful