Albert Castiglia: Up All Night

By DOUG COLLETTE
January 1, 2018
Sign in to view read count 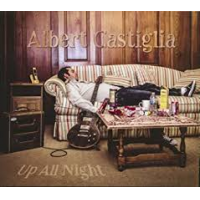 Make no mistake, the ambiguity in the title of bluesman guitarist/composer Albert Castilglia's seventh album, Up All Night, is a positive attribute. Because as much as he trades in the tried and true of the blues, as on the rough-and-tumble, "Hoodoo On Me," he manages to imprint a personal stamp on what he does.

On the opener of this album, for instance, his gruff voice and gristly guitar bring the sentiment so close to home, it all becomes personal. Likewise this title song which, while it follows traditional blues structure, emits no sense Castiglia's simply doing what he thinks is correct, but what he is deeply moved to play and sing. Mike Zito's production, mixing and mastering ensures the recordings resonate as deeply in sonic terms as in emotional ones, so bassist Jimmy Pritchard's instrument penetrates the mix even as it maintains its proportion with the sounds of drummer Brian Menendez' kit.

The subtle touches of Lewis Stephens' keyboards, like the rollicking piano on a double-entendre-laden "Chase Her Around the House," hardly intrude on the basic instrumental trio format any more than Johnny Sansone's harmonica on the number written with Cyril Neville, "Unhappy House of Blues" or the deliciously "Delilah." Meanwhile, it might go without saying that Sonny Landreth's slide playing, as featured on "95 South," adds an element of distinction, but this modern expert at that technique deserves the recognition: he injects a sense of abandon and unpredictability this music otherwise might not evince so emphatically.

Because Albert Castiglia radiates a certain measure of self-consciousness about what he does-just one iota of self-restraint would enhance his credibility-the sense of humor with which he imbues a track like "Three Legged Dog" (and this album's comical cover image) becomes his saving grace. A composition of the producer's, "Quit Your Bitching," is tongue-in-cheek too, but only partly so, and thus becomes all the more listenable for its double meaning(s). And that cut derives extra force from its juxtaposition with the proportionately direct message within "Woman Don't Lie." Castiglia's guitar playing is equally pointed on both.

While much of Up All Night is upbeat, electric blues on the order of "Knocked Down Loaded," when the eleven tracks conclude with the more reflective likes of the acoustic-guitar driven "You Got Me to That Place," the album solidifies as a whole unto itself; Castiglia's days of touring with Junior Wells serve him honorably in knowing well how to punctuate a solo and set of material, eight of which songs Albert wrote or collaborated on here. The end result is a durable, consistent set of contemporary blues that reflects well on its Louisiana recording site and all involved in its writing, playing, recording and production.

Hoodoo On Me; I Been Up All Night; Three Legged Dog; 95 South; Knocked Down Loaded; Quit Your Bitching; Woman Don't Lie; Unhappy House Of Blues; Delilah; Chase Her Around The House; You Got Me To That Place.