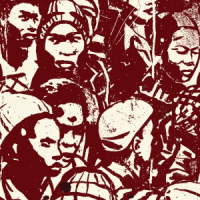 Universal Beings E&F Sides is an addendum to drummer and producer Makaya McCraven's paradigm-shifting underground hit Universal Beings (International Anthem, 2018). That album was a double (four sides: A, B, C and D). The new album is a single (two sides: E and F). Geddit?

Most, but not all, of the tracks on E&F Sides were recorded at the same sessions as the first album, in London, Chicago, New York and Los Angeles. Featured musicians include young London lions tenor saxophonists Shabaka Hutchings and Nubya Garcia, keyboard player Kamaal Williams and bassist Daniel Casimir, along with US fellow travellers including harpist Brandee Younger, cellist Tomeka Reid, vibraphonist Joel Ross and guitarist Jeff Parker. Two tracks feature saxophonist Soweto Kinch, one of the pathfinders for the new London jazz scene and its engagement with issues of identity and cultural inclusiveness.

These musicians and their peers comprise an informal international alliance which is shaping a new jazz aesthetic, rooted in the tradition but reaching out beyond it. It is the sound of jazz renewing itself, staying relevant and avoiding becoming a repertoire-based museum piece. The grooves are deep and the improvisations fly high and the spirit of trailblazing labels such as Impulse! and Strata-East live on within it. It is not to be missed. Actually, it cannot be missed—it is coming down the road regardless. It is a total blast.

Universal Beings E&F Sides is being released digitally in July 2020 and on CD and LP in September. The album forms the soundtrack for Mark Pallman's documentary Universal Beings, which follows McCraven to London, Chicago, New York and Los Angeles while he was recording the project. Check the doc's "Strangers In The City" extracts in the YouTube trailer below.