By JEFF DAYTON-JOHNSON
August 15, 2012
Sign in to view read count 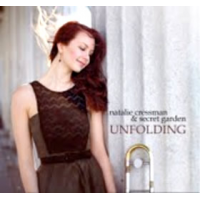 Looking for antecedents for trombonist/vocalist Natalie Cressman? All About Jazz's C. Michael Bailey correctly points us to Jack Teagarden, the original singing trombonist. And, in fact, Cressman finds plenty of opportunity in the funkier passages of Unfolding, her debut album, to deploy a fluid and full Teagarden-like sound on the instrument.

But Cressman—twenty years old and a student at the Manhattan School of Music at the time of Unfolding's release—also suggests a more contemporary reference: Esperanza Spalding, the superstar singing bassist. As with much of Spalding's vocals on her first record—the fine Junjo (Ayva Musica, 2006)—Cressman's wordless and vaguely Brazilian vocals on the madrigal-like "Echo" sound like sonic accents, not the stuff of a "lead singer." That said, other examples of singing on this record sound more like Spalding's subsequent albums, wherein she established herself as a bona fide singer.

Cressman even pays homage here to Joni Mitchell, with a thoughtful and successfully rearranged version of Mitchell's vocal version of Charles Mingus' "Goodbye Pork Pie Hat." It's a great reach back, from the vantage point of 2012, through Mitchell's 1979 version, to Mingus' 1959 original (Mitchell's version can be found on her Mingus (Asylum, 1979); it's closely based on Mingus' from his Mingus Ah Um (Columbia, 1959), and follows both Mingus' composed melody as well as John Handy's tenor sax solo).

Cressman's vocal agility is furthermore on display in the difficult leaps and intervals of several compositions, her tone clear and true and unadorned.

The band is well-rehearsed and dominated, in a way, by the unsubtly forward drummer Jake Goldblas; he doesn't take much prompting to boil over, and it can be pretty exciting. Saxophonist Peter Apfelbaum—like Cressman, a traveler on the Bay Area/New York jazz corridor—guests for a fiery solo on "That Kind." Throughout, the sound is mostly acoustic, mostly mainstream with hints of Latin and rock.

Unfolding shares the strengths and weaknesses of a lot of very strong debuts: highly attentive solos, carefully crafted arrangements and spirited performances on the plus side; coupled with a certain lack of focus and melodic interest in the original compositions. Cressman will only get better, as trombonist, singer, composer and leader, and that process will be accelerated with further apprenticeship with more seasoned leaders. With the release of Unfolding, her phone should be ringing off the hook.