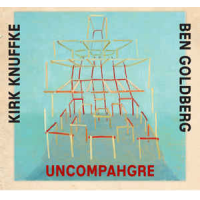 Two of the most in-demand horn players in the current creative music scene, cornetist Kirk Knuffke and clarinetist Ben Goldberg delight in making music that combines a deep respect for the history of jazz with an unmistakable spirit of adventure and risk. Both are seasoned veterans with nothing to prove, and they can do it all, from intimate duo and trio settings to larger ensemble work, and with everything from well-constructed compositions to freely-improvised music. Regardless of the context or the repertoire, with these two musicians one is guaranteed to get top-shelf results, so putting the two of them together is a no-brainer. And the fourteen idea-filled extemporaneous miniatures on Uncompahgre show convincingly that free improvisation can be both challenging and a heck of a lot of fun at the same time.

Knuffke's no stranger to duo recordings, as he's made some fine ones with pianist Jesse Stacken for the Steeplechase label. But those focused on classic material; for example Mockingbird (2009) drew from the Ellington and Monk songbooks, and Orange Was the Color (2011) delved into Mingus. Here those constraints are nonexistent, which offers substantially more liberation, but Knuffke is too lyrical a player to let that freedom become licentious or self-indulgent. And Goldberg shares that sensibility fully, as he is similarly inclined to seek a melodic foundation for whatever he is playing, something demonstrated on his own recent duo recording with pianist Myra Melford, the suitably titled Dialogue (BAG Production, 2015).

Goldberg's dulcet phrases start things off on "Saguache" before Knuffke joins in, Goldberg giving him enough room to find his bearings alongside Goldberg's dancing swirls, as the two begin their communicative exchange in earnest. One thing that becomes evident right off the bat is the players' willingness to cede ground to their counterpart, only responding when it enhances the overall product. There is ego on display here, of course—these guys are masters at their craft—but they are more eager to let each piece develop its independent logic together than to try to seize the upper hand and dominate the conversation. The resulting music is remarkably empathetic and collegial; one can tell these musicians really enjoy working with each other.

Contrasts are sometimes present, as on "Blue River," where Goldberg and Knuffke alternate in playing fleet phrases while the other offers languid interjections. And there are some tender moments too, with the somber beauty of "Ouray" allowing for a reflective reverie. But the most exciting moments occur when the two join together as one in jaunty, rhythmic rapport. "Rocky Ford" may offer the best example, as a piece that begins with a pensive, tuneful opening gradually builds in dynamic energy, both players' elongating their lines together and heightening their rhythmic interaction until the music positively swings. There's as much New Orleans as downtown New York on this record, something one rarely finds among "avant-garde" outings.

Perhaps the only downside to the album is the excessive brevity of some of the tracks—five are two minutes or shorter—where ideas emerge and fade before they fully ripen. But on the other hand, there's no filler here either, as neither Goldberg nor Knuffke is interested in gratuitous meandering. The music is played with purpose, and with a generous spirit, making for a fine recording and another first-rate entry in both players' impressive discographies.